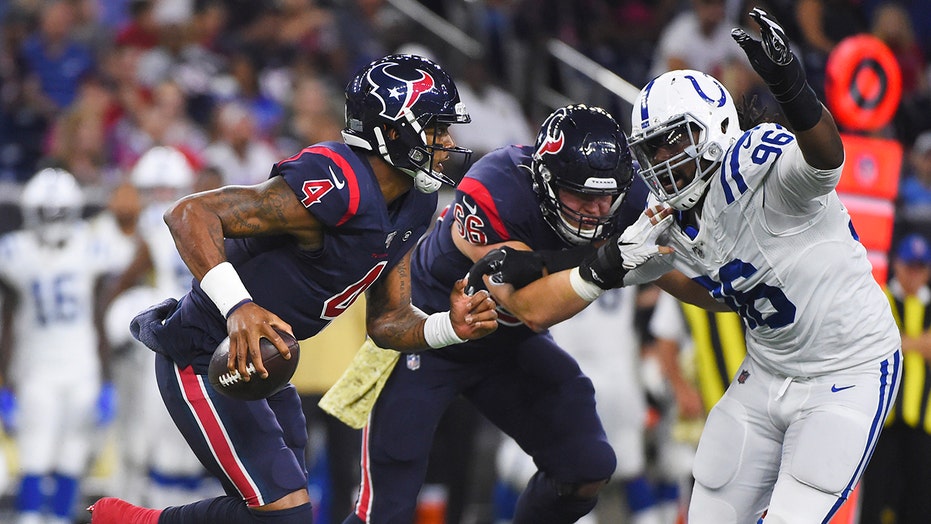 The Houston Texans and Indianapolis Colts’ Thursday night matchup was shrouded in controversy a week after an ugly brawl during a Thursday game stole the national spotlight.

The Texans pulled out a close 20-17 win over the Colts behind DeAndre Hopkins’ two touchdown catches, but it wasn’t without a controversial ruling on a fumble late in the game.

Texans quarterback Deshaun Watson ran the ball six yards in hopes of running out the clock with about 50 seconds left in the game when it appeared Colts linebacker Darius Leonard stripped the ball. But officials on the field ruled the offense recovered the fumble and, with under two minutes, NFL rules don't allow coaches to challenge a call, which left Colts coach Frank Reich powerless unless the referees decided to review the play.

“In #INDvsHOU, officials on the field ruled a fumble recovered by the offense. There was no clear visual evidence of a recovery by the defense,” the tweet read.

Video appeared to show Leonard jarring the ball from Watson.

Leonard believed he had recovered the ball. He showed reporters and teammates in the locker room video of the play, according to the Indy Star.

“I punched it out,” Leonard said, according to the newspaper. “I punched for it, got it out. I had it, and after that, they said it wasn’t a fumble.”

Leonard added: “Deshaun said I hit it out. Right after the play, he said it.”

Reich had asked the officials to review the play and he said he was told that the NFL’s office in New York was taking a look at it.

“The officials, I was trying to get them to review it, but the officials on the sideline told me it was being reviewed, and then the Texans called timeout,” Reich said, according to the paper. “That gave them, in New York, even more time to review it. Obviously, they saw it and didn’t think it was a fumble.”

In a pivotal AFC South matchup, the referees again become the talking point of the game.