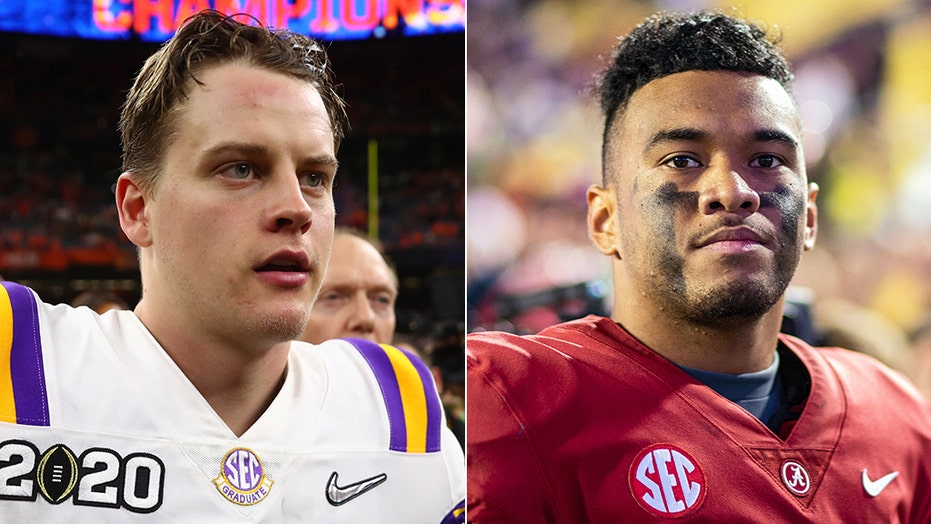 Davis, who was selected in the sixth round, 196th overall by the Denver Broncos in the 1995 draft, said he understands why former LSU quarterback Joe Burrow has remained the unanimous overall No. 1 pick going into this year’s draft.

“I get it, they’re (Cincinnati Bengals) not going anywhere. They’re going to pick the guy that came up with the best college career you’ve ever seen, I get it. You won’t get a lot of argument from me with that,” he told Fox News.

“But I’ve said this before, this is what I would do … I like Tua better than Burrow but I get it. I understand, I get it. I think Tua is the best player in the draft, he’s my No. 1 pick.”

Tagovailoa has been projected to land the No. 5 overall pick with the Miami Dolphins but two-time Super Bowl champion Davis thinks he should land the No. 2 spot with the Washington Redskins.

“I like his mental game, I love his personality,” Davis said of the former Alabama quarterback.

“I think when you talk to players, especially quarterbacks, I think it’s important to listen in how they come off. If they come off where like, all right, it’s not genuine – I need a guy that I’m just going to gravitate towards, that I’m going to follow him, not because I have to but because I want to. Tua brings that sauce.”

TUA TAGOVAILOA ADDRESSES HEALTH CONCERNS AHEAD OF DRAFT: ‘IT’S A PART OF THE GAME’

Davis called the situation in Washington “tricky,” acknowledging that it’s going to be difficult for the Redskins to decide between a signal-caller and the top defensive end in the draft pool.

“At No. 2, I love Chase Young, but I’ve also seen where you have Khalil Mack, Von Miller, you have some of the best edge rushers in the game and their ability to change a team’s trajectory is not nearly as impactful as you getting a signal-caller,” Davis said of previous draft years.

He said that while the Redskins did draft Dwayne Haskins for the position last year, it doesn’t necessarily mean they can’t still make a move on quarterbacks this year.

“I called it when they said Josh Rosen, I said if I was the (Arizona) Cardinals I am going to select Kyler Murray in the first round (2019 draft). ‘No TD, you can’t do that they just brought in a new coach and the GM just drafted the quarterback last year.’ So what? You pick it until you get it right. Who said you can't pick two number ones a year after?”

Davis has no doubt that Young will be a solid pick no matter what, agreeing that the defensive end out of Ohio State already has “Hall of Fame stamped on his locker,” but the Redskins, he thinks, would be better off selecting Tagovailoa.

“I just like Tua … I think Tua is going to be an outstanding football player, I do.”