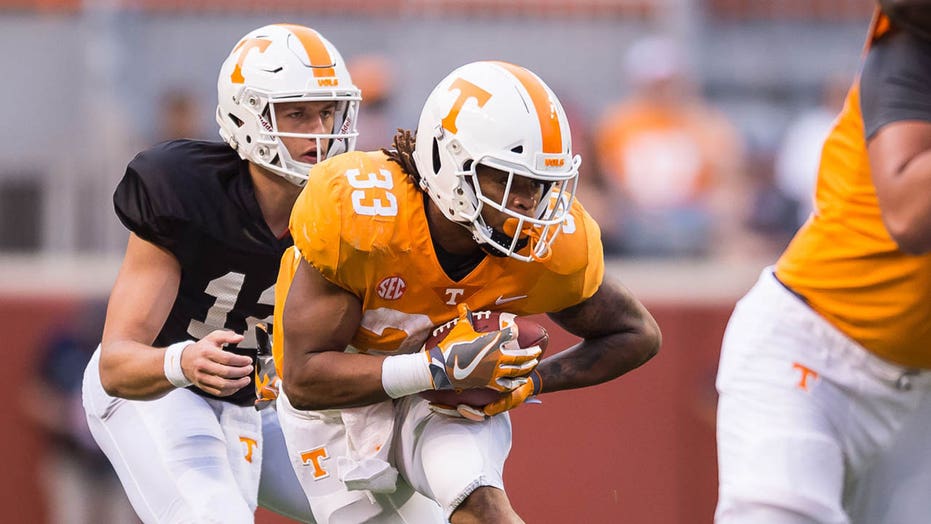 The University of Tennessee Police Department released footage Tuesday of Tennessee Volunteers linebacker Jeremy Banks’ comments to officers after he was arrested on an outstanding warrant, including one remark in which he tells a civilian riding with officers: "Where I'm from, we shoot at cops."

Banks, 20, was arrested after he initially was pulled over for an illegal U-turn on Sept. 15. The video shows Banks’ interaction with the officers. Banks had a warrant for his arrest issued on Aug. 21 for failing to appear in court in July for a misdemeanor driving with a suspended license charge, according to the Knoxville Sentinel.

At the time of the arrest, Banks had a polite demeanor toward the arresting officers. He told them he “never met no police officers as nice as y’all” but his attitude changed as the ride continued. He then asked the officers “What you would do without that badge?”

“I should’ve ran, test y’all’s speed,” Banks said. “Y’all would’ve never catch me. That’s what I should’ve did. Next time, I am, I promise you. Never again y’all boys will take me to jail. Not UT police.”

Banks also addressed a woman who was in the car for a ride-along.

“Ma’am, I don’t think you want to be an intern, because where I’m from, we shoot at cops. I’m from Memphis, Tennessee,” he said.

Video of the incident was obtained by WBIR-TV.

Banks apologized for his actions in a statement released by the university.

“I want to sincerely apologize to my family, the University of Tennessee and the law enforcement community,” Banks said. “I deeply regret my language and attitude in the video. I have great respect for our police men and women, and I am embarrassed by my actions that night. That’s not who I am. I promise to be a better representative for the University of Tennessee moving forward.”

“Jeremy’s behavior and comments are unacceptable and portrayed himself and our football program very poorly and he understands that,” Pruitt said. “We will address the matter internally.”

Pruitt added: “I’m determined to do what I can to help Jeremy grow up and become a better man. Our team and staff respect our law enforcement and we will continue to educate our players on how to carry themselves at all times.”

Banks plays running back and linebacker for Tennessee. He has seven total tackles this season. He does not have any rushing attempts this season.