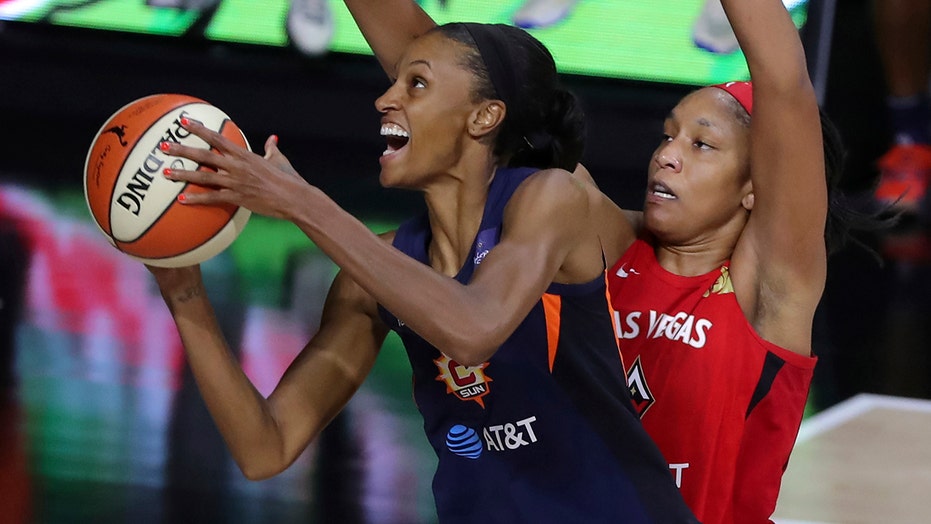 DeWanna Bonner got off to a great individual start to the season, but as she was thriving the Connecticut Sun lost their first five games.

The veteran, who went to Connecticut during the offseason after playing for the Phoenix Mercury, watched video and felt that while she was scoring at a high rate, she wasn't involving her teammates enough. So she decided to get her teammates more involved on offense and the results have paid off the Sun.

Connecticut has won 10 of its last 15 games to clinch a playoff spot.

“I had a conversation with my dad, actually. ’I don’t like the way I’m playing. I don’t feel like I’m making my teammates better, making them feel confident," Bonner said after the playoff-clinching win Monday. "I think I just got everybody involved.”

Connecticut became the third team to start a season with five or more losses and still earn a postseason berth after the Sun. Connecticut joined Los Angeles, which dropped its first seven games in 2015 and New York, which lost its first five in 2012.

“A lot of people were counting us out at the beginning when we went 0-5 and didn’t think we were going to make the playoffs at one point,” Bonner said. “So when I said ‘stay with us,’ that’s what I meant. So now we’re in there, so this is the fun part. This is the fun part of basketball.”

Curt Miller was an assistant coach on that Sparks team that lost its first seven games and that experience helped him be patient during the Sun's losing skid to start the season.

While the Sun are one of seven teams to qualify for the playoffs the final week, there will be intrigue during the final week of the regular season as teams jockey for seeding. The order of finish for the teams is still up for grabs with four squads within a win of the top two seeds. The top two seeds get a bye until the semifinals of the playoffs.

1. Seattle (16-3): The Storm move back to the top of the power poll riding a five-game winning streak that included a last-second win over Los Angeles on a buzzer-beater by Jewell Loyd. Seattle had dropped two second the past two weeks behind Las Vegas.

2. Las Vegas (14-4): The Aces control their own playoff destiny, closing the season against Los Angeles and Seattle.

3. Los Angeles (14-5): Nneka Ogwumike returned after missing a couple of games with a tight back, however, the Sparks lost Sydney Wiese to an ankle injury and potentially Brittney Sykes to an abdominal bruise.

4. Minnesota (13-6): Damiris Dantas has picked up her game lately, averaging 21 points and nearly 10 rebounds over the Lynx's last four contests.

5. Phoenix (12-8): The Mercury's six-game winning streak came to an end on Monday, but no one has been playing better over the last two weeks.

6. Chicago (11-9) The Sky will need more production out of their bench if they hope to make any kind of playoff run. The core four of Courtney Vandersloot, Allie Quigley, Cheyenne Parker and Kahleah Copper have played great, but they've logged a lot of minutes lately.

7. Connecticut (10-10): Alyssa Thomas has been a major reason for the Sun's success. She's averaged 18 points, 8 rebounds and 6 assists over her last four games — all wins. She missed one game to deal with a hand issue.

8. Dallas (7-12): Arike Ogunbowale is leading the league in scoring (22.2 ppg) and had a career-best 39 in an overtime win over Washington that put the Wings in control of their playoff fate.

9. Washington (5-13): Myisha Hines-Allen could be one of the front-runners for most improved player. She is averaging 15.4 points and 8.7 rebounds this season; last year she scored 2.3 points pulled down 2.1 rebounds last year a contest.

10. Atlanta (5-14): The Dream are finally healthy and lately have been playing better. The team has gone 2-1 over its last three games after dropping 13 of its first 16. Betnijah Laney has been the steady force this year, averaging 16.5 points, 4.3 rebounds and 4.1 assists.

11. Indiana (5-14): The Fever are most likely going to miss the playoffs for a fourth consecutive season. The pieces are in place for a bright future with a talented young group led by Teaira McCowan, Lauren Cox, Julia Allemand and Kelsey and Tiffany Mitchell.

12. New York (2-16): Joyner Holmes set the team rookie record with 13 rebounds in her last game to go along with 13 points. The Liberty will have the best shot at winning the draft lottery for a second-straight season.

PLAYER OF THE WEEK

Skylar Diggins-Smith earned player of the week honors after helping Phoenix go 3-1 over the past seven days. She averaged 26 points, 6 rebounds and 5.7 assists. Other players receiving votes included Candace Parker of Los Angeles, DeWanna Bonner of Phoenix and Breanna Stewart of Seattle.

Las Vegas vs Seattle, Sunday. The top seed could be on the line when these two teams meet in a makeup game to close out the regular season. Seattle holds a one-game lead, but the Aces won the first meeting between the teams. It could be interesting since homecourt advantage is a lot less valuable in the bubble, so securing the No. 1 seed isn't as valuable as previous years.