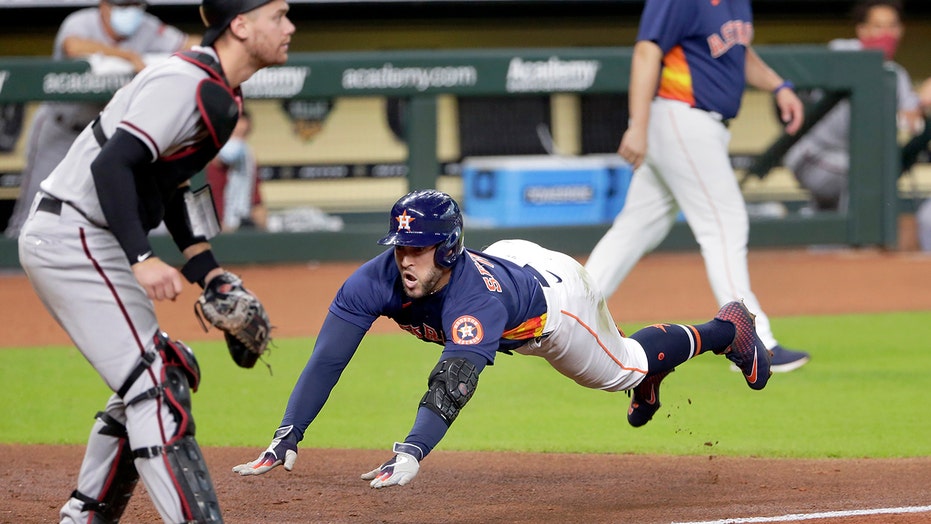 George Springer homered twice, including an inside-the-park shot, to lead the Houston Astros over the Arizona Diamondbacks 3-2 on Sunday.

Carlos Correa drove in the go-ahead run for Houston with a sacrifice fly in the eighth inning.

Springer’s two home runs gave him 13 this year. He is set to become a free agent in the offseason, so it might have been his final home game with the Astros.

“We hope not,” manager Dusty Baker said. “I certainly hope that we get to the point where he puts enough pressure on the Astros to sign him. I mean, this guy is a heck of a player, and I think his best years are still ahead of him. This ballpark is perfect for him.”

Houston improved to 27-26 and will finish the regular season on the road against Seattle and Texas.

Springer’s second homer came in the seventh off Hector Rondon. Springer pumped his first after the ball narrowly cleared the fence and a leaping Kole Calhoun to tie the game at 2.

The seventh-inning homer was the 2,000th hit by an Astros player at Minute Maid Park, which opened in 2000. Springer also hit the 1,500th home run at the stadium in 2016. The tally includes the regular season and postseason.

“I’m concerned about now, the next trip, the next games,” Springer said, brushing off questions about free agency. “I’ll cross that bridge when I get to it.”

The Astros took the lead in the eighth on Correa’s sac fly off Junior Guerra (1-2) that scored Alex Bregman.

Ryan Pressley pitched a scoreless ninth for his 12th save. Blake Taylor (2-1) retired Arizona in the eighth.

Diamondbacks starter Madison Bumgarner frequently expressed frustration with plate umpire Adam Hamari’s strike zone, becoming especially demonstrative in the third. After the inning, Bumgarner had a long conversation with Hamari before heading to the dugout.

In the fourth, players in the Arizona dugout continued to yell at Hamari until he stopped the game to yell back, eventually throwing out manager Torey Lovullo for his third ejection of the season.

“Ultimately, we know what a competitor he is,” Lovullo said of Bumgarner. “We know what his expectations are. I know he’s been battling through some frustration over the past couple of weeks. Obviously, a great sign. Super encouraged by my conversation and the results today.”

Bumgarner allowed two hits and struck out seven in five innings. The veteran lefty, who entered 0-4 with an ERA of 8.53, extended his winless streak to 13 starts, including eight since signing with Arizona in the offseason.

“We made a lot of good pitches, still made some mistakes,” Bumgarner said. “Nobody’s going through an entire game without it. But the less you make, the less chance you have of them hurting you, too.”

The Diamondbacks loaded the bases with no outs in the fourth but scored just one run on a double play.

Springer was asked when he knew he had an inside-the-park home run and said, “When I slid and scored and I was safe.”

LOVULLO ON HIS EJECTION

“Usually if I get ejected from a baseball game, it’s not that call. It’s not one call. I know the umpires are doing their absolute best to get the ball in the strike zone and call balls, balls, and strikes, strikes. It was a buildup of several pitches, accumulation of things and some input I was getting from the hitters, and getting information that things were a little inconsistent. Obviously, I took things a little too far from the dugout and was ejected. It’s nothing I’m ever proud of.”

Astros third base coach Gary Pettis will not travel with the team on the upcoming road trip as he deals with hip discomfort, Baker said. Omar Lopez, the first base coach, handled third base duties on Sunday.

Astros: 1B Yuli Gurriel was back in the lineup after resting Saturday with a minor hand injury.

Diamondbacks: LHP Caleb Smith (0-0, 4.50 ERA) will make his fourth start of the season when Arizona hosts Texas on Tuesday night.