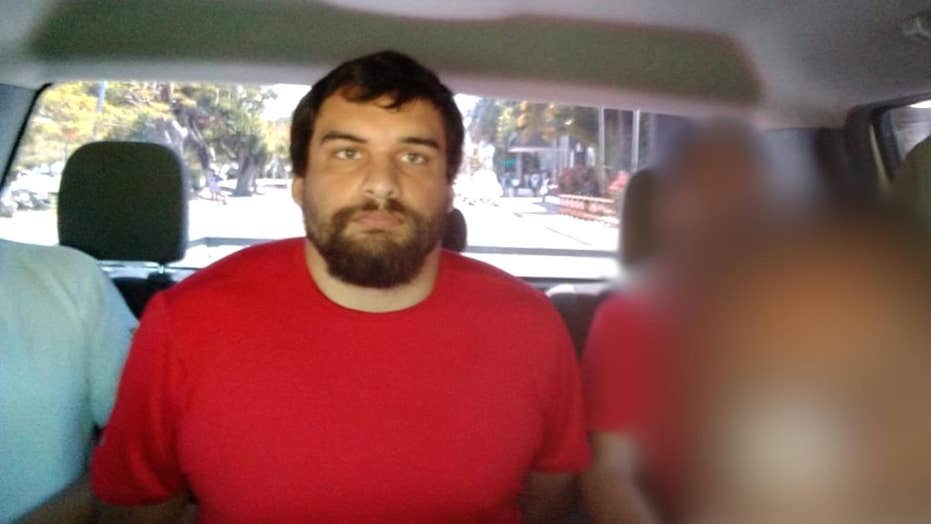 The son of former NFL lineman Barry Bennett was arrested in Mexico Saturday on charges of murdering his parents earlier this week in their Minnesota home, authorities said.

Dylan Bennett, 22, was arrested by Mexican law enforcement in Cancun after Todd County investigators used his cell phone, credit card and ATM activity since Friday to locate him there, the sheriff's office announced. He is charged with two counts of second-degree murder.

“Using intelligence developed by the Todd County Sheriff’s Office, the Minnesota Bureau of Criminal Apprehension [BCA] and the FBI, Mexican law enforcement located Dylan Bennett shortly before noon today at a hotel in Cancun, Mexico, and took him into custody,” the sheriff’s office said.

Dylan Bennett is pictured after his arrest in Cancun. (Courtesy of Mexican authorities/Todd County Sheriff's Office)

The FBI will transport Bennett back to Minnesota for arraignment "in the coming days," the sheriff’s office said

Dylan Bennett had contacted Todd County Sheriff Steve Och on Saturday to indicate he would turn himself in, but Mexican authorities arrested him before investigators could communicate the information to them.

Bennett is suspected of shooting and killing his parents, Barry and Carol Bennett, both 63, in their home in Long Prairie, a town of about 3,500 about 100 miles northwest of Minneapolis.

A medical examiner’s report found that Barry and Carol Bennett died of multiple gunshot wounds and ruled both their deaths a homicide. The couple was found Wednesday by a friend who performed a welfare check after not hearing from either of them since Tuesday. Authorities believe the Bennetts were killed Monday, the day Barry Bennett was last seen alive.

Authorities found Dylan Bennett’s car at his parent’s home, along with an empty box for a 9mm handgun and a box for ammunition.

Dylan Bennett had been seen driving his car on Monday during a bank transaction when a large sum of cash was withdrawn from his parents’ account, the criminal complaint said.

Carol Bennett’s credit and debit cards were used in Illinois, Ohio and Wisconsin from Monday through Wednesday, and her car was later found in Colombus, Ohio, where Dylan Bennett had purchased a plane ticket for a flight to Cancun.

Barry Bennett was a defensive lineman who played 11 seasons in the NFL with the New Orleans Saints, the New York Jets and the Minnesota Vikings before he retired in 1988. He later became a physical education teacher in Long Prairie and eventually retired, The Star Tribune reported.