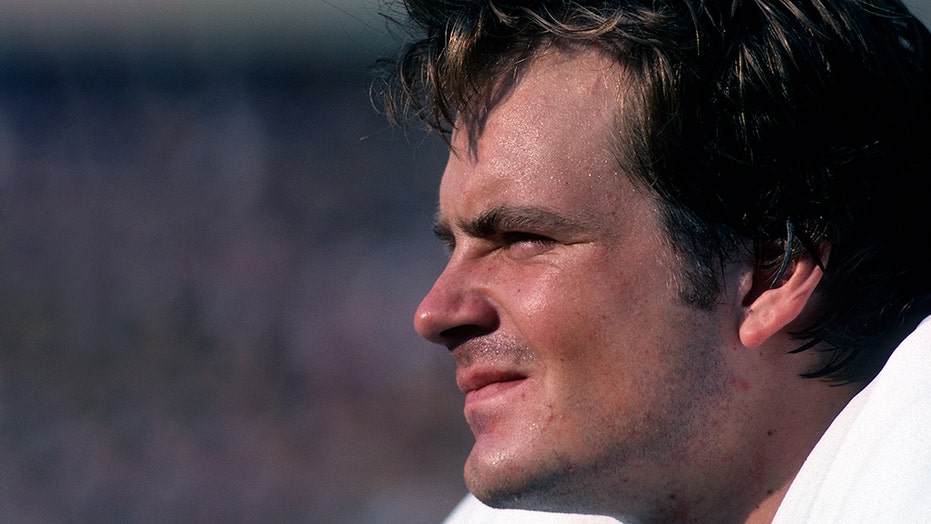 The bodies of former NFL lineman Barry Bennett and his wife were found inside their rural Minnesota home Wednesday and police are now searching for the couple’s 22-year-old son.

Barry and Carol Bennett, both 63, were found by a friend who performed a welfare check after phoning the Todd County Sheriff's Office to report that they had not responded to texts or phone calls since Tuesday.

In court documents filed Friday, authorities said the Bennetts died of "multiple gunshot wounds" at their home in Long Prairie, a town of about 3,500 about 100 miles northwest of Minneapolis. An arrest warrant has been issued for the couple's son, Dylan Bennett, who is charged with two counts of second-degree murder.

Dylan John Bennett, 22, is sought in connection to the deaths of his parents, former NFL linesman Barry Bennett, and his wife. (Todd County Sheriff's Office)

On Monday morning, Dylan Bennett was seen driving his car during a bank transaction in which a large sum of cash was withdrawn from the Bennetts' account, the complaint said.

Carol Bennett's credit and debit cards were used in Wisconsin, Illinois and Ohio on Monday, Tuesday and Wednesday. Her car was found in Columbus, Ohio; Dylan Bennett had a plane ticket for a flight from Columbus to Cancun, Mexico.

Authorities believe Dylan Bennett was in Mexico on Thursday, based on phone usage.

NFL LEGEND JOHN ELWAY OPENS UP ABOUT DEBILITATING CONDITION: 'I COULDN'T PICK UP A FOOTBALL'

Bennett was a defensive lineman and played 11 seasons in the NFL with the New Orleans Saints, the New York Jets, and the Minnesota Vikings before retiring in 1988.

He subsequently became a physical education teacher in Long Prairie but later retired from that job, according to The Star Tribune.

“It hit hard this morning,” said Jon Kringen, superintendent for the Long Prairie Grey Eagle School District. “Everyone was in shock when they heard. It’s impossible to comprehend that this could happen. People are lost for understanding. … He and his wife were good people.”

The Minnesota Bureau of Criminal Apprehension and the Central Minnesota Violent Offender’s Task Force are assisting in the investigation.