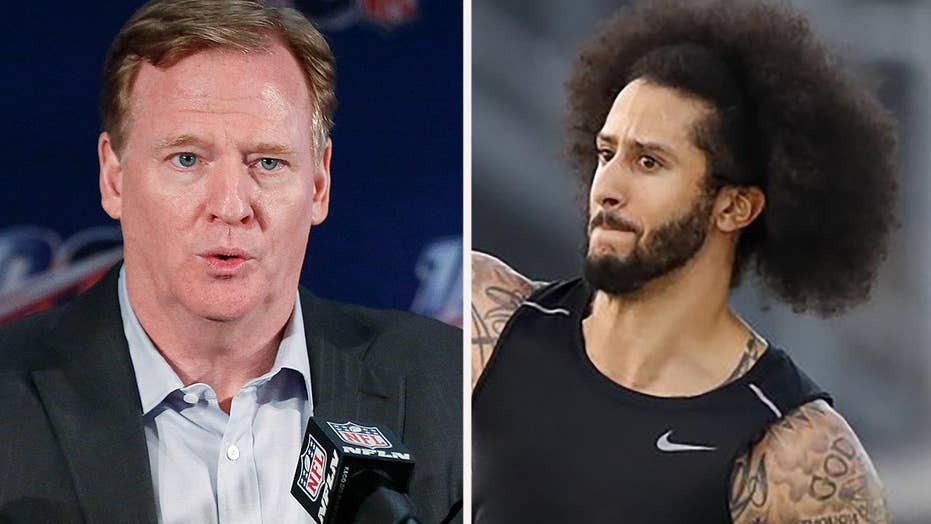 Roger Goodell says NFL has 'moved on' from Colin Kaepernick

"There is nothing new about American terrorist attacks against Black and Brown people for the expansion of American imperialism," he tweeted.

In a separate tweet, Kaepernick decried "American imperialism" and its "policing and plundering of the nonwhite world."

"America has always sanctioned and besieged Black and Brown bodies both at home and abroad," he wrote. "America militarism is the weapon wielded by American imperialism, to enforce its policing and plundering of the nonwhite world."

It's unclear what specifically Kaepernick was referring to, but his comments came amid left-leaning criticism of President Trump's decision to kill Soleimani, who led the elite Quds Force within the Islamic Revolutionary Guard Corps (IRGC); the U.S. government has long considered him a terrorist.

Kaepernick's agent did not immediately respond to Fox News' request for comment.

The ex-NFL player previously faced a wave of backlash after he claimed to protest systemic racism by kneeling during the National Anthem. On Thanksgiving, Kaepernick attended an "Unthanksgiving event" where he accused the United States of stealing "over 1.5 billion acres of land from Indigenous people."

NFL Commissioner Roger Goodell seemed to quash any possibility of a Kaepernick comeback in December.

Speaking to reporters at the league’s winter meetings in Irving, Texas, Goodell addressed the scheduled Kaepernick workout for NFL teams in November -- an event that all but collapsed when Kaepernick decided at the last minute to relocate it away from the facility that he and league officials had initially agreed upon.

“This was about creating an opportunity. We created that opportunity. It was a unique opportunity, a credible opportunity,” Goodell said, according to Reuters, “and he chose not to take it. I understand that."

“We’ve moved on,” the commissioner added, suggesting that the league was finished considering Kaepernick for future workouts or team roster openings.