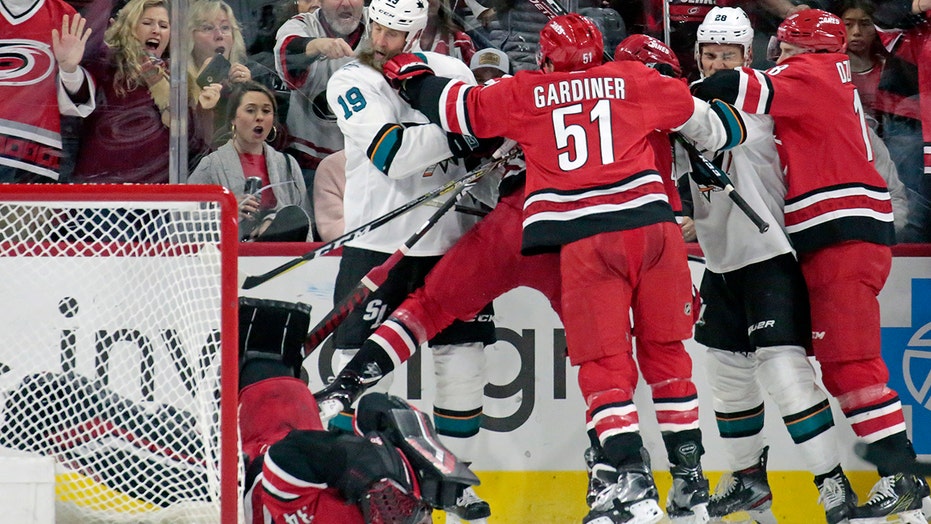 One punch was all Joe Thornton needed Thursday night to spark a brawl between his San Jose Sharks and the Carolina Hurricanes during their matchup.

The fight started in the second period with the Hurricanes up 2-1. Thornton skated past Hurricanes goaltender Petr Mrazek, who froze the puck, and jabbed him with his stick as he skated past. Mrazek apparently didn’t like that too much and wildly swung his stick at the Sharks center.

Mrazek then skated over and confronted Thornton face-to-face. It was unclear what was said between the two players, but Thornton threw a right jab at Mrazek and the goalie fell backward.

“Just a hockey play,” Thornton told the San Jose Mercury News after the game. “I think we were both just having fun. Just boys being boys. … A little bit of excitement.”

He added that he wasn’t surprised Mrazek went down easy.

Mrazek wasn’t so playful about the fight. He called Thornton’s move a “cheap shot,” according to the Raleigh News & Observer. He also said he wasn't thrown off by Thornton's punch.

“To be honest, it’s even better. You feel like you’re in the game and you want to make saves for the guys and get the win,” he told the paper.

Carolina Hurricanes' Jake Gardiner (51) and Ryan Dzingel (18) tussle with San Jose Sharks' Joe Thornton (19) and Timo Meier (28) of Switzerland after Thornton knocked Carolina goaltender Petr Mrazek (34) of the Czech Republic to the ice during the second period of an NHL hockey game in Raleigh, N.C., Thursday, Dec. 5, 2019. Thornton and Mrazek were penalized on the play. (AP Photo/Chris Seward)

Carolina got the last laugh on San Jose, defeating the Sharks in a shootout, 3-2.