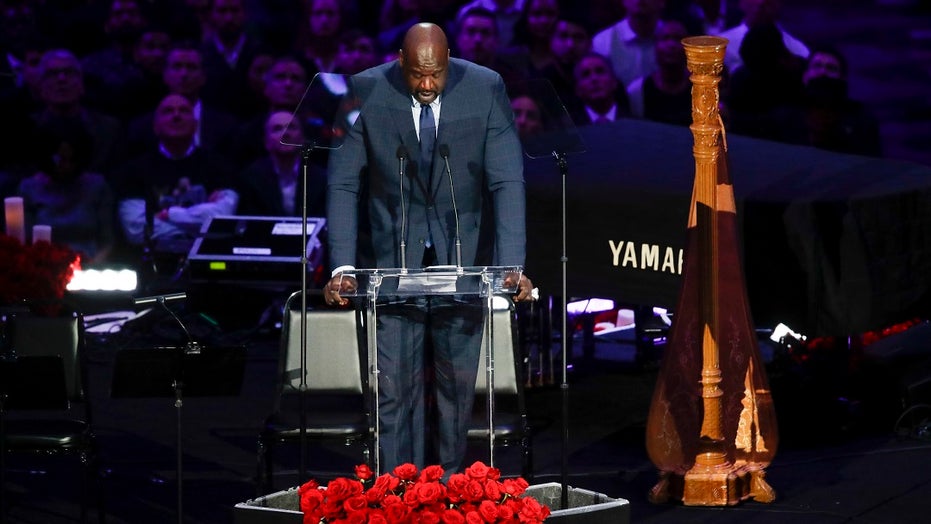 Shaquille O’Neal honored former teammate Kobe Bryant in front of a packed crowd at the Staples Center in Los Angeles, calling the NBA legend "my little brother," "heaven's MVP" and dropped an F-bomb while recounting a story about the pair.

The Hall of Famer was one of many of Bryant's family, friends and NBA contemporaries who eulogized the former Los Angeles Laker who died, along with his daughter, Gianna, 13, and seven others, in a fiery Jan. 26 helicopter crash in Calabasas, Calif.

"Like all of you, I continue to be devastated over the loss of my friend, my little brother, Kobe Bryant, and my beautiful niece Gigi," O'Neal said during Monday's tribute.

Shaquille O'Neal speaks during a celebration of life for Kobe Bryant and his daughter Gianna on Monday in Los Angeles. (AP Photo/Marcio Jose Sanchez)

During his speech, O'Neal spoke of the supposed rivalry the pair had while guiding the Lakers to three NBA championships together.

"As many of you know, Kobe and I had a very complex relationship," he said.

At one point, he dropped an F-bomb while recounting an episode when he told Bryant to pass the ball more.

"Kobe and I pushed one another to play some of the greatest ball of all time," said O'Neal. "Sometimes, like immature kids, we argued and we fought, or we insulted each other with offhand remarks. But when the cameras were turned off, he and I would throw a wink at each other and say, 'Let's go whoop ass.'"

He added that the pair respected and loved each other.

Other speakers included Michael Jordan and Bryant's wife, Vanessa, who has filed a wrong death lawsuit against the helicopter operator. Bryant spent 20 season with the Lakers, winning five NBA championships and being selected as a All-Star 18 times.