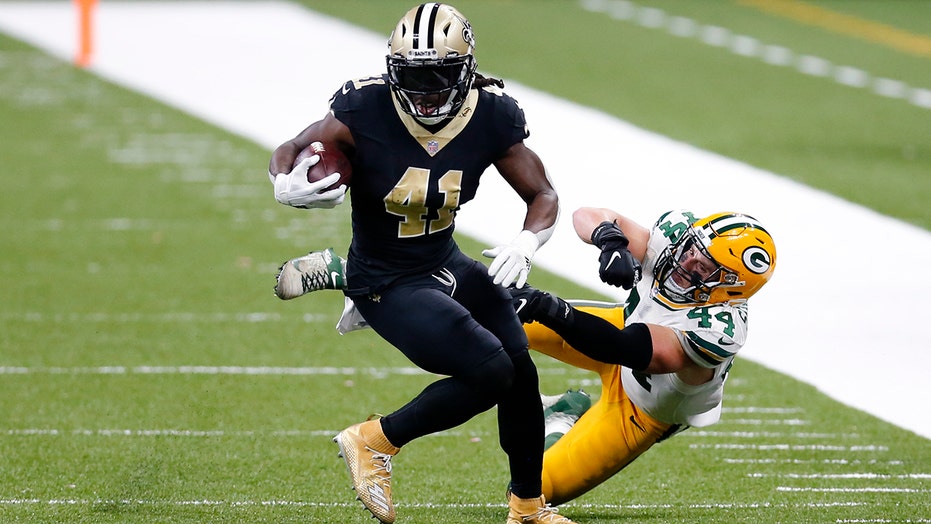 New Orleans Saints running back Alvin Kamara showed off his quickness in the third quarter against the Green Bay Packers on Sunday night.

Kamara caught the ball from Drew Brees, broke a tackle and got some good blocking in front of him. He would absorb another couple of hits and break a few more tackles to get into the end zone.

It was a 52-yard catch-and-run to help the Saints tie the game with the Packers before the start of the fourth quarter.

49ERS' NICK MULLENS EXPLAINS WHY HE FIXES THE TOPPLED-OVER PYLON

At that point in the game, Kamara had 10 catches for 133 yards and two touchdowns. He also rushed for 58 yards on six carries. It’s the second straight time New Orleans has used Kamara as the main means of production on the offense.

In last week’s loss against the Las Vegas Raiders, Kamara finished with 79 rushing yards and two rushing touchdowns. He also led all receivers with nine catches for 95 yards.

The offense has been mostly stagnant since the loss of Michael Thomas. Brees looked better against the Packers but was 26-for-38 with 312 passing yards, a touchdown pass and an interception. He only had 4.82 air yards per pass, which became talking point in the days leading up to the Packers game.