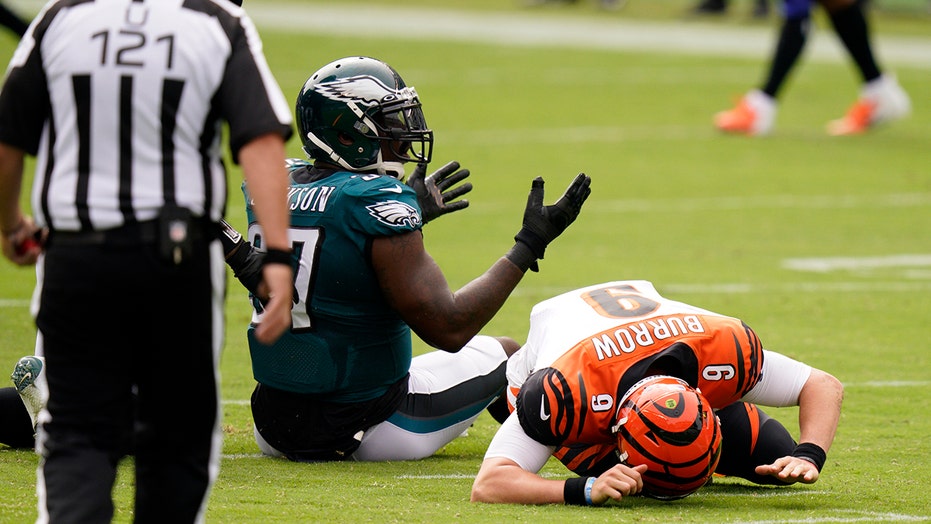 Burrow went down at the beginning of the second quarter. Jackson was flagged for roughing the passer. The rookie didn’t appear to see Jackson bearing down on him.

The 2019 Heisman Trophy winner was evaluated and somehow returned to the game.

Cincinnati Bengals' Joe Burrow (9) reacts after a hit by Philadelphia Eagles' Malik Jackson (97) during the first half of an NFL football game, Sept. 27, in Philadelphia. (AP Photo/Chris Szagola)

Last week, Burrow threw 61 times, recorded more than 300 passing yards and had his first-career touchdown passes. However, the Bengals lost to the Browns.

The Bengals struggled on offense all last season. He explained last week that he doesn’t like losing. He was undefeated during his senior season with LSU.

“Losing isn’t very fun. This might be the only time in my sporting career that I have lost two games in a row. It doesn’t feel very good. I know that the guys in there are hurting. We are going to come back to work tomorrow and try to get this thing right. Losing is unacceptable to me, to everyone in there, to coach [Zac] Taylor and to everybody in this organization. We are just going to have to get it fixed,” he told reporters after the game, according to the team site.