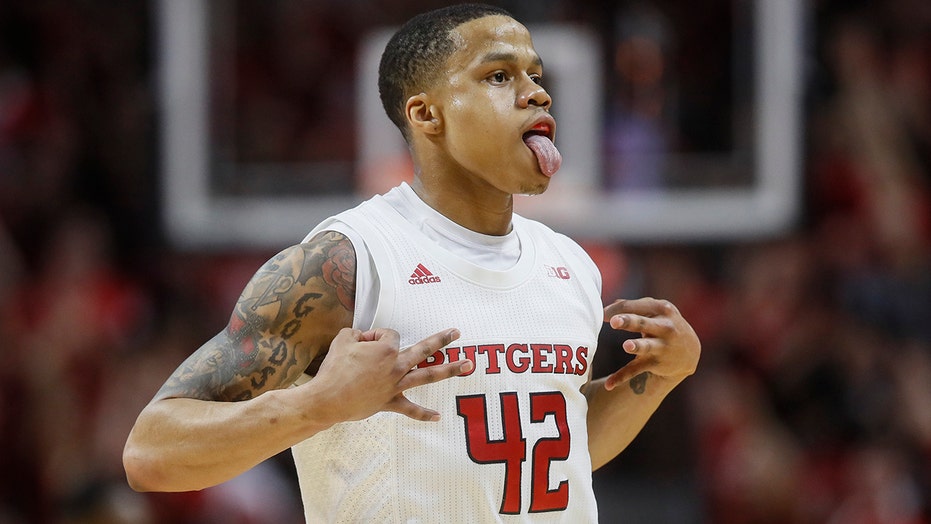 Rutgers has inched a little closer to its first NCAA Tournament berth in almost three decades.

Jacob Young came off the bench and scored 17 points and the Scarlet Knights claimed their fourth-ranked victim at home with a 78-67 victory over No. 9 Maryland on Tuesday night.

The win snapped a three-game losing streak for Rutgers (19-11, 10-9 Big Ten) and it was their school-record 18th win home this season, tops in the nation. It includes wins over Seton Hall, Penn State and Illinois, who were ranked at the time and still are.

Rutgers coach Steve Pikiell refuses to talk about The Tournament or getting over the hump, insisting his focus is now on the regular-season finale at Purdue.

“We have won a lot of games in the best league in the country," Pikiell said. “We have had the No. 1 schedule in the country, not just in the league, the last seven or eight games. We won against a lot of really good teams. This is another one today. We have one more with Purdue and then the conference tournament."

If there is a knock on Rutgers it is the the team's record on the road. It is 1-10 away from the RAC.

Gio Baker, who added 11 points for Rutgers, is not sure what the NCAA Tournament selection committee thinks about the Scarlet Knights.

“We feel like we are good enough," Baker said. “I don't know if we have done enough but we feel like we belong in the tournament. We have the talent with the right team and the right mindset. But we still have more games left."

Maryland coach Mark Turgeon believes Rutgers should get a bid. The Terps (23-7, 13-6) certainly will despite three losses in their last four games.

“We don't feel sorry for ourselves," Turgeon said. “We know who we are. We didn't get to 23-5 by not being a good basketball team playing a Top-10 schedule in the country. It's just that this last 72 hours has not gone so well. I love my team. We're going to bounce back, but we just didn't have it tonight. Give Rutgers credit."

Montez Mathis added 15 points for Rutgers, which 49% from the field, including 7 of 16 from long range.

Jalen Smith had 16 points and 10 rebounds for Maryland. Anthony Cowan added 19 points for the Terps, who shot an atrocious 6 of 32 from 3-point range, including 2 of 16 in the first half.

Young helped break the game open early, hitting his first four shots to ignite a 15-4 spurt that allowed the Scarlet Knights to open a 19-8 lead.

“My coach just tells me to stay ready and be the spark," Young said.

Cowan and Smith helped the Terps stay close, eventually going to the locker room down 35-29.

The second half was all Rutgers. It hit 10 of its first 14 shots and led by as many as 21 points. Maryland held the lead for less than a minute in the game and only made it close in garbage time.

The game ended with Rutgers fans on the court celebrating a win that had major tournament implications.

Maryland: Coupled with No. 16 Michigan State's win over No. 20 Penn State, the Terps are tied for first place in the conference with one game to go. No. 23 Illinois and No. 24 Wisconsin can move into a first place tie with wins on Wednesday and Thursday.

Rutgers: The Scarlet Knights are 4-4 in games against AP Top 25 teams and they can taste their first trip to the NCAA Tournament since the 1990-91 season. That was the last year Rutgers won 10 games in a league, going 14-4 in the Atlantic 10.

Maryland: Finishes the regular season at home against No. 19 Michigan on Sunday.

Rutgers: Ends the regular season at Purdue on Saturday, and a win would probably seal the deal.