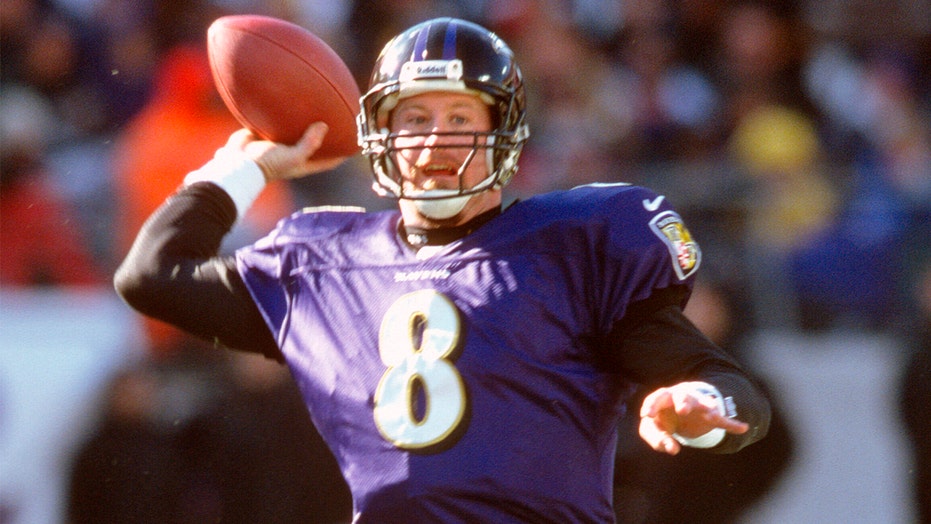 Trent Dilfer, a Super Bowl champion with the Baltimore Ravens in 2000, played 14 seasons in the NFL who was hired by ESPN as an analyst after he retired, a position that he held until 2017.

Dilfer is now the head coach at Lipscomb Academy, a private high school in Nashville, Tenn., and a partner with Panini America.

The Super Bowl-winning quarterback caught up with Fox News recently to discuss the 2020 NFL season. One thing Dilfer believes in is letting rookie quarterbacks sit and learn behind a veteran for a year before taking control under center. He also talked about how no crowd noise in stadiums due to the coronavirus pandemic is a huge reason why quarterbacks are having early season success so far this year.

Here are Dilfer's thoughts on the NFL current stars and the rest of the season.

Fox News: Who are the best young quarterbacks in the NFL? Why?

Trent Dilfer: “Patrick Mahomes. Deshaun Watson. Lamar Jackson. Kyler Murray. Those four have played a little bit, and they’ve played awesome. Quarterback play is exponentially better now than it’s ever been. There’s a lot of reasons for that, but it’s pretty incredible. And if you talk to Hall of Famers like Steve Young, Troy Aikman, and Brett Favre, they will say the same thing.

“Everybody is blown away by how talented these kids are, how fast they are integrating into the NFL. They are playing with wisdom beyond their years. The game has just changed so much. They are running air-raid offenses when they are in 10th grade.

“The challenge with quarterback is the gap between good and great. Most think that it’s a small gap, and I fell under this lie that going from good to great is just a little tiny hill that you have to climb, where instead it’s really a mountain. You’re at the bottom when you’re good. Getting to be great is a giant climb. And it’s those that can do that part of it.”

Fox News: What kind of an impact does an organization and system have on a QB’s career?

Dilfer: “I think it’s as big as anything. I have a good friend, Brock Huard, who does TV and he played in the NFL. He does a lot of quarterback evaluations, and he refuses to evaluate a quarterback until he knows where he goes. Because he believes 90 percent of it depends on where he goes, and what he’s surrounded by.

“I personally think that’s a little exaggerated. But here’s a guy that’s been there, done it. He does it for a living, takes pride in his evaluations, and he refuses to do it until he finds out where the guy is at. And I kind of agree with some of that. I don’t care how talented you are, I don’t care how smart and tough you are because if you go to the wrong place, it’s going to be tough sledding.

“It doesn’t mean it’s a death sentence, but it’s going to be a lot tougher than going to Kansas City under Andy Reid, or New Orleans with Sean Payton. Whoever is the next quarterback in New Orleans, is going to be set up for success, and that’s the reality of it. There’s just guys that get it more than the rest. And if you’re their quarterback, you have the upper hand.”

Dilfer: “I’m jumping on the bandwagon. I never do this stuff and make predictions, but yeah, the Ravens are going to the Super Bowl. They have the right mentality. They didn’t go bury their heads in the sand after they got upset. They went to work.

“I listened to something Lamar Jackson said the other day, and I was so impressed with his maturity level. He was talking about chemistry and connection. High-level, interpersonal relationship stuff from a young kid. And I’m like, ‘Ah, he gets it.’ It’s not a talent thing with the Ravens, they just need to develop that championship DNA as a team. And they are doing it through trust and togetherness.

“For NFL MVP, I’m going Aaron Rodgers. And the Ravens will beat the Green Bay Packers in the Super Bowl.”