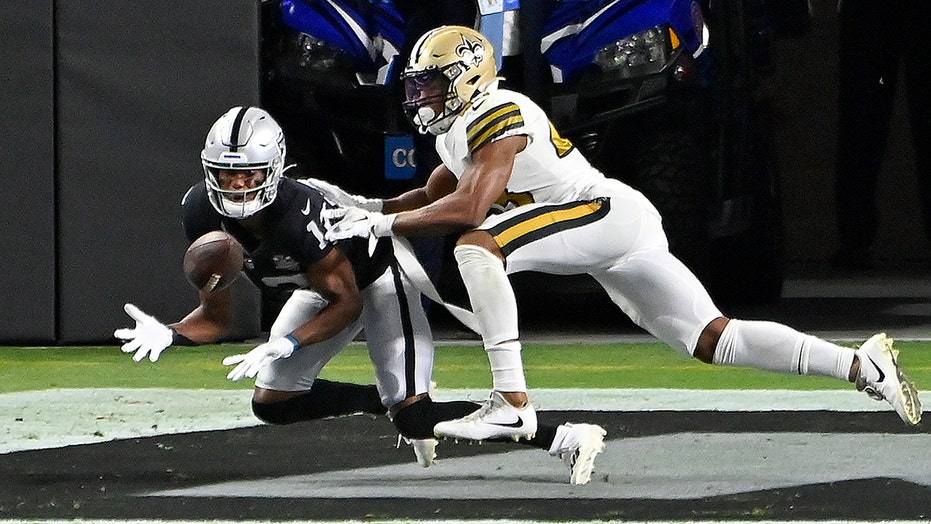 Jones caught a 15-yard touchdown pass from Derek Carr in the second quarter to cut the New Orleans Saints’ lead to just three points with 1:44 remaining in the first half.

Jones then led his teammates in a hand-sanitizer celebration.

The move was fitting for 2020 as the Raiders opened up their new home stadium without any fans.

Las Vegas and New Orleans were tied at 17 apiece at halftime.

The Raiders acquired Jones during the 2019 season from the Buffalo Bills for a 2021 fifth-round draft pick. In Oakland last season, Jones had 20 catches for 147 yards but didn’t score a touchdown.

In last week’s win against the Carolina Panthers, he only played 14% of the offensive snaps and didn’t tally any catches.

Derek Carr and fullback Alex Ingold will forever have their names in the record books after the two connected for the first Raiders touchdown at Allegiant Stadium in Las Vegas.

Carr found Ingold from 3 yards out to cap an 11-play, 63-yard drive earlier in the second quarter.

Both teams came into the game 1-0.