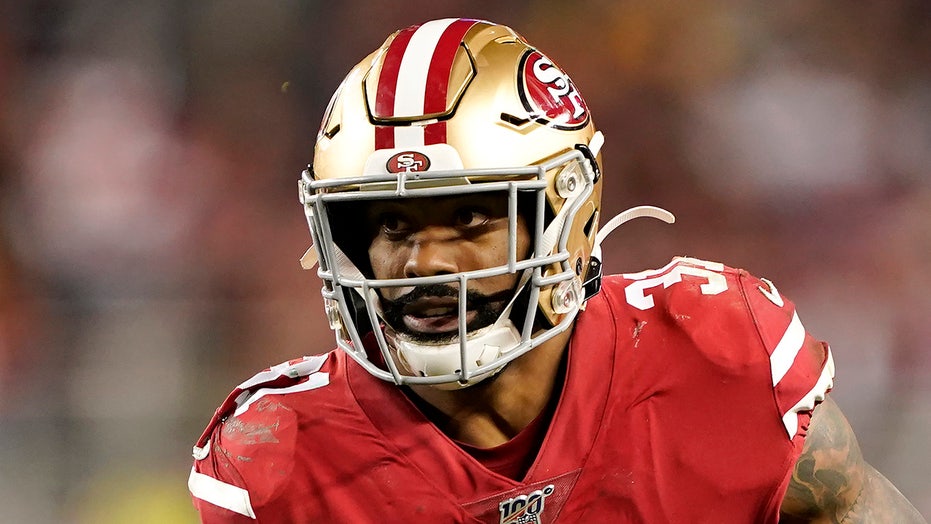 San Francisco 49ers running back Raheem Mostert had a breakout game in the NFC Championship game against the Green Bay Packers on Sunday, breaking a team record set by Colin Kaepernick.

Mostert finished with 220 rushing yards on 29 carries. He had four touchdowns in the, 37-20 victory. Mostert scored three times in the first half and once in the second – which put the nail in the coffin. Kaepernick had 181 rushing yards during the 2012-13 playoffs.

The Packers had no answers for Mostert once he began getting a majority of the carries in the absence of Tevin Coleman, who left the game with an elbow injury. Mostert just kept running it down the throat of the Packers defense and it worked.

It worked so well that San Francisco only had quarterback Jimmy Garoppolo throw the ball eight times in the entire game. Garoppolo was 6-for-8 with 77 passing yards. Two of his passes were thrown to Mostert, who gained six receiving yards in the game.

Mostert became the only player in NFL history to rush for more than 200 yards and score four or more rushing touchdowns, according to NFL Research. His 220 rushing yards was second-most in an NFL playoff game, finishing just 28 yards behind Eric Dickerson who did it with the Los Angeles Rams against the Dallas Cowboys in 1985.

Mostert is a relative unknown in NFL circles. He joined the Philadelphia Eagles as an undrafted free agent in May 2015. He would be on the Miami Dolphins, Baltimore Ravens, Cleveland Browns, New York Jets and Chicago Bears before he got meaningful carries with the 49ers starting in 2019.

This season, Mostert played in all 16 games. He rushed for 772 yards on 137 carries and had eight rushing touchdowns.