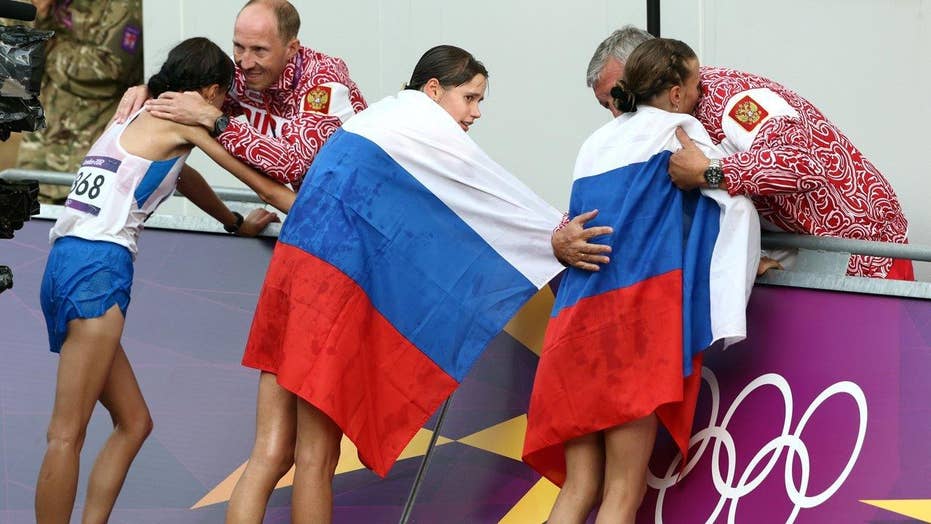 ST PETERSBURG, Russia – Russian President Vladimir Putin has condemned as unfair Friday's decision by the IAAF to uphold a ban on competition for Russian track and field athletes.

Speaking to foreign media at a late evening round-table on Friday, Putin said the IAAF meted out "collective" punishment that has hurt clean athletes.

In an unprecedented ruling loaded with geopolitical ramifications, the IAAF on Friday upheld its ban on Russia's track and field federation, saying the country had made some progress in cleaning up but failed to meet the requirements for reinstatement and would be barred from sending its athletes to the Olympics in Rio de Janeiro that begin in 50 days.

"Russian athletes could not credibly return to international competition without undermining the confidence of their competitors and the public," IAAF President Sebastian Coe said.

Russia immediately condemned the decision, saying it was "deeply disappointed" and that the Rio Games will be "diminished" by the absence of its athletes. The Russian track federation said it was considering an appeal to the Court of Arbitration for Sport -- the sports world's highest court.

The IAAF, track's world governing body, left open a "tiny crack" that would allow any individual Russian athletes who have been untainted by doping and have been subjected to effective testing outside Russia to apply to compete in the games.

However, the IAAF said those athletes would be few and would be eligible to compete only as "individuals" -- and not under the Russian flag.

"The crack in the door is quite narrow and there won't be many who manage to get through that crack in the door," said Rune Andersen, the Norwegian anti-doping expert who headed the IAAF task force that determined that Russia's reforms were not enough.

The IAAF said it was necessary to ban the entire track and field team because there was no way to verify which athletes could be considered clean.

"The system in Russia has been tainted by doping from the top level down," Andersen said. "We cannot trust that what people might call clean athletes are really clean. If you have one or two or five with negative tests, it does not mean the athletes are clean. History has shown that is not the case."

Coe dismissed suggestions there were any political motivations behind the decision.

"There were members from all four corners of the world, and the decision was unanimous," he said. "Politics did not play a part today."

The ruling came four days before a sports summit called by the IOC to address "the difficult decision between collective responsibility and individual justice."

The IOC said it had "taken note" of the IAAF ruling and that its executive board will meet by teleconference Saturday to "discuss the appropriate next steps."

There has been speculation the IOC could overrule the IAAF or impose a compromise that would allow "clean" Russian athletes to compete. However, Coe made clear that the IAAF runs the sport and determines which athletes are eligible, not the IOC.

"I don't have a message for the IOC," said Coe, who will attend Tuesday's meeting in Lausanne, Switzerland. "Eligibility is a matter for the IAAF."

The suspension of the Russian federation, known as RusAF, was imposed in November following a report by a World Anti-Doping Agency commission that alleged state-sponsored cheating, corruption and cover-ups. On Wednesday, WADA issued a new report citing continuing obstruction and violations of drug-testing in Russia.

"The deep-seated culture of tolerance, or worse, for doping that led RusAF being suspended in the first appears not to have changed materially to date," the IAAF said.

Coe said the unanimous decision by the 25 members of the IAAF council to maintain the ban sends "a very clear signal to athletes and the public about our intention to reform our sport."

The decision was hailed by many sports officials and athletes' groups outside Russia who have been pushing the IAAF to take a hard line to restore some credibility to the much-maligned global anti-doping system.

"It gives a measure of hope to clean athletes that there are consequences not only for athletes who dope, but for countries which do not engage seriously in the fight against doping," U.S. Olympic Committee CEO Scott Blackmun said. "That is a much-needed message."

Added U.S. Anti-Doping Agency chief executive Travis Tygart: "Obviously, banning Russian track and field from the Olympics is the right outcome. The world's clean athletes came together and demanded that their voices were heard."

In expressing its disappointment, Russia's Sports Ministry appealed to IOC members to "consider the impact that our athletes' exclusion will have on the dreams and the people of Russia."

"Clean athletes' dreams are being destroyed because of the reprehensible behavior of other athletes and officials," the ministry said. "They have sacrificed years of their lives striving to compete at the Olympics and now that sacrifice looks likely to be wasted."

It added that the Olympics "are supposed to be a source of unity, and we hope that they remain as a way of bringing people together."

The IAAF rejected a last-minute plea by Russian Sports Minister Vitaly Mutko, who claimed the country had cleaned up its anti-doping system and met all the requirements for readmission.

"We firmly believe that clean athletes should not be punished for the actions of others," he said in an open letter to Coe.

Before the ruling was announced, Russian President Vladimir Putin said he rejected the idea of "collective responsibility" in doping cases and said the Russian state had never supported doping by any athletes.

Two-time Olympic pole vault champion Yelena Isinbayeva was among the Russian athletes hoping to compete in Rio. She has threatened to go to court on human rights grounds if she is excluded from the games. Other cases could end up in CAS, the Swiss-based appeals court.

The IAAF did change its rules to make way for "any individual athletes who can clearly and convincingly show that they are not tainted" by doping and who have been outside Russia and subject to effective drug-testing systems.

Those individuals can apply to a special IAAF committee for permission to compete as a "neutral athlete," not for Russia.

The IAAF also recommended that Russian whistleblower Yulia Stepanova be allowed to compete at the Olympics as an independent athlete. The 800-meter runner who served a doping ban gave information along with her husband that led to a broad investigation of doping inside Russia.

The IAAF task force recommended she be allowed to compete because of the "extraordinary contribution" she made to the anti-doping effort.