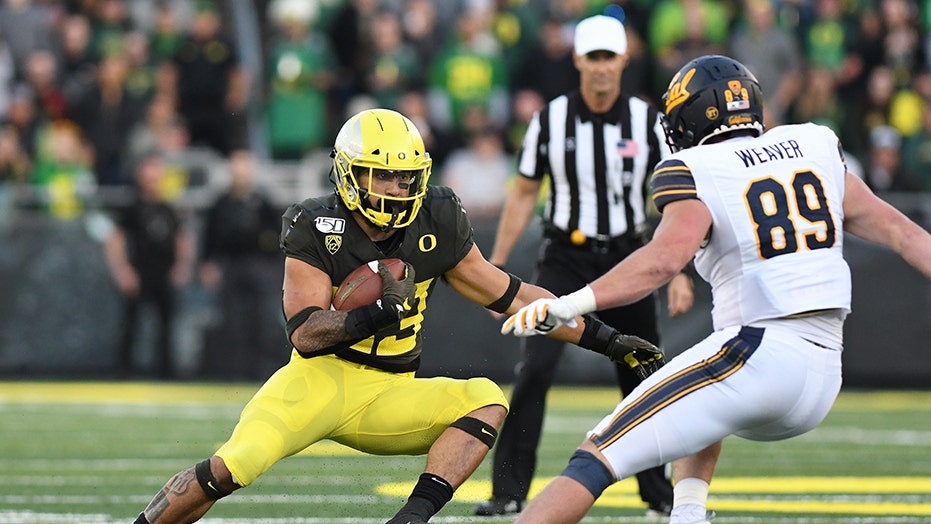 Oregon Ducks running back Cyrus Habibi-Likio made the biggest hit of the night on Saturday when he tackled a fan who somehow evaded security and ended up on the field during a game against the University of California at Autzen Stadium in Eugene, Oregon.

The fan, who was described as "an idiot" by some, sprinted onto the field during a TV timeout, jogging past the Oregon huddle and police officers until Habibi-Likio decided to do something about it.

The running back left the team's huddle, sprinted 20 yards and tackled the fan from behind to the delight of the crowd. The fan, who had just put his arms up in celebration appeared to not see it coming.

Here's a better view of the fan eluding police and security, thanks to Oregon student journalist, Ethan Wyss.

Habibi-Likio told reporters after the contest that he tackled the fan to simply keep the game going and he wasn't looking for any type of crowd reaction, according to ESPN.

“We were down and he was kind of taking a while - prayers out to him, I hope he’s not hurt,” Habibi-Likio told reporters after the game. "I had no intention of hurting him, we just need to get the game going."

Oregon Ducks running back Cyrus Habibi-Likio (33) warms up before the college football game between the Oregon Ducks and the Arizona Wildcats on October 27, 2018 at Arizona Stadium in Tucson, AZ. (Photo by Carlos Herrera/Icon Sportswire via Getty Images)

“This is the Pac-12 North, and this is a Pac-12 game, we gotta get going or the result would have been different.”﻿

After the game, Habibi-Likio felt bad about tackling him and told reporters if the fan found him on Instagram he would take him for ice cream to patch things up.