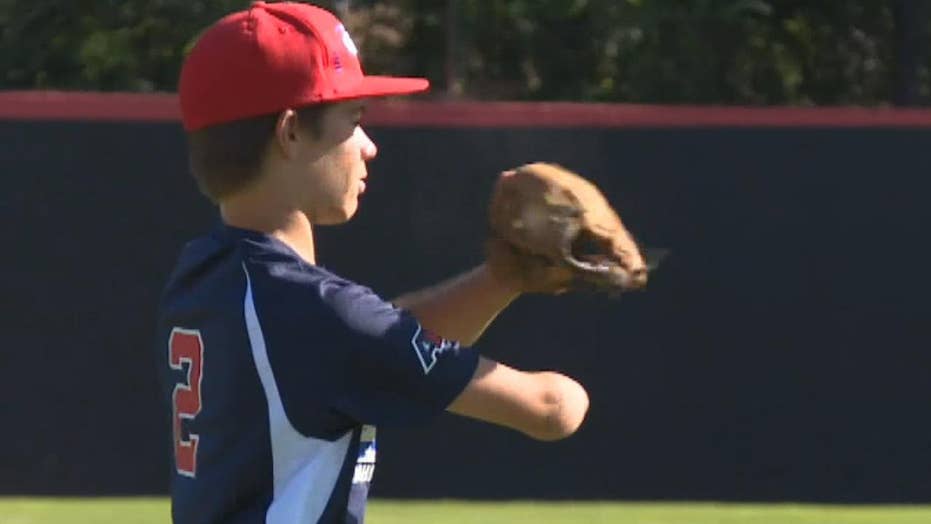 13-year-old Grayden Lucas, who was born with one hand, excels on the baseball diamond in Idaho.

A young Idaho baseball player has major league dreams and is not letting something like a missing hand stop him from achieving his goals.

Grayden Lucas, 13, was born without part of his right arm and hand but he has still managed to dominate on the pitcher’s mound.

“He has a natural athletic ability, so we, you know baseball's a part of our family, so he jumped in at like 4 years old playing league baseball, excelled at it, and go to be a part of really successful teams,” Jay Lucas, the teen’s father and his coach, told KIVI-TV on Wednesday.

Baseball has been in engrained in the Lucas family. Jay Lucas played baseball through college and Easton Lucas, Grayden’s brother, was drafted by the Miami Marlins earlier this month.

Grayden told the station he loves working with the team during the game.

“There's a lot of situations that you need to be a team-player, like mainly hitting, if there's a guy on third [base], groundball,” Grayden told the station.

Grayden could follow in the footsteps of at least two former professional baseball players who played in the majors with one arm or hand.

Pete Gray was an outfielder for the St. Louis Browns in 1945. He lost his right arm when he was young in a wagon accident and played in 77 games for the Browns. He batted .218 with six doubles.

Jim Abbot was born without a right hand. He played 10 seasons in the majors for the California Angels, New York Yankees, Chicago White Sox and Milwaukee Brewers from 1989 to 1999.