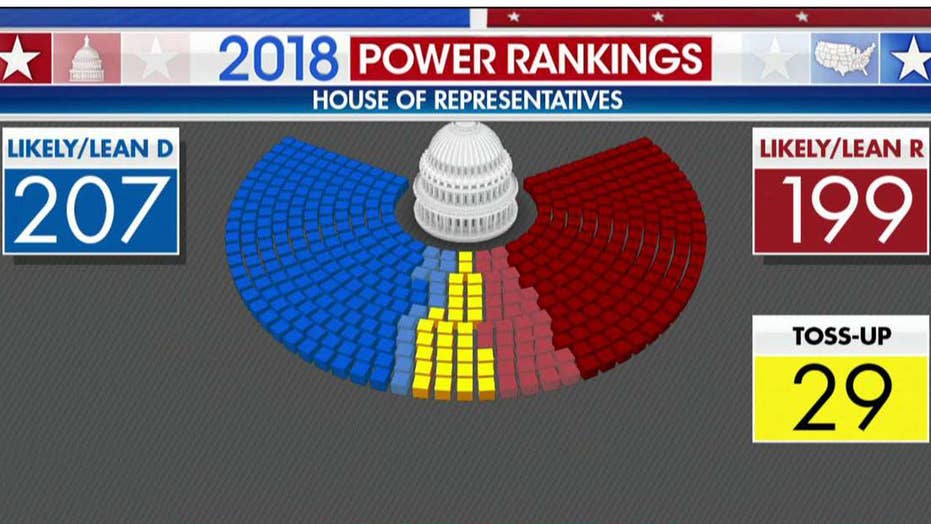 Breaking down the battle for the balance of power

Democrats need a net 23 seats to win back the majority in the House; chief congressional correspondent Mike Emanuel reports.

Several members of the NFL Players’ Coalition -- an activist group within the league motivated by perceived racial injustice -- urged Americans to go to the polls Tuesday to vote in the midterm elections, warning: “Our lives depend on it.”

Unlike the recent remarks made by some prominent NBA figures, the players didn’t endorse any specific candidates in their pitch, however, the group has been critical of President Trump and his administration's policies.

“Right now, our collective national identity is one of pain and despair, of confusion and anger. We are fractured, we are hurting and too many are finding themselves as mourners. But America’s true identity is one of greatness,” the letter says. “We may have deep scars, but from times of darkness we have emerged as a nation with the courage to protect our neighbor from harm and the willingness to insist on our shared values of hope, of inclusion, of community. We have always stood up for each other. We have always been able to reclaim our identity.”

Washington Redskins cornerback Josh Norman was among the players who co-signed a letter urging Americans to vote during the midterm elections. (AP Photo/Seth Wenig)

The letter ensures Americans that the midterm elections could signal “we believe and are committed to the happiness, the health and the lives of all Americans.” It also added that the candidates that are elected will help shape the future “and these future members of the United States government will decide whether to preach messages of hope and unity, or messages of hate and division.”

The letter also touches on allegations of voter suppression and issues with gerrymandering.

“If you think your vote doesn’t matter, just look at how hard certain officials are trying to suppress it. In Georgia, one lawsuit alleges that 53,000 newly registered voters have been placed in ‘pending’ status because of a law that disproportionately affects minority voters, while another claims that 340,000 voter registrations were incorrectly canceled by Brian Kemp, the secretary of state who is currently running for governor,” the letter says. “In Michigan, North Carolina and Texas legislators have drawn voting boundaries to cram as many like-minded – often minority – voters into one district.”

The letter ends: “On November 6, we can demand better. For each one of us, for our families, for our neighbors. Vote. Our lives depend on it.”

"Right now, our collective national identity is one of pain and despair, of confusion and anger."

The Players’ Coalition struck a deal with the NFL earlier this season in which players would stop protesting during the national anthem in exchange for the league donating millions to causes the group supports. Trump vociferously opposed the anthem demonstrations, frequently slamming players who knelt during "The Star-Spangled Banner."