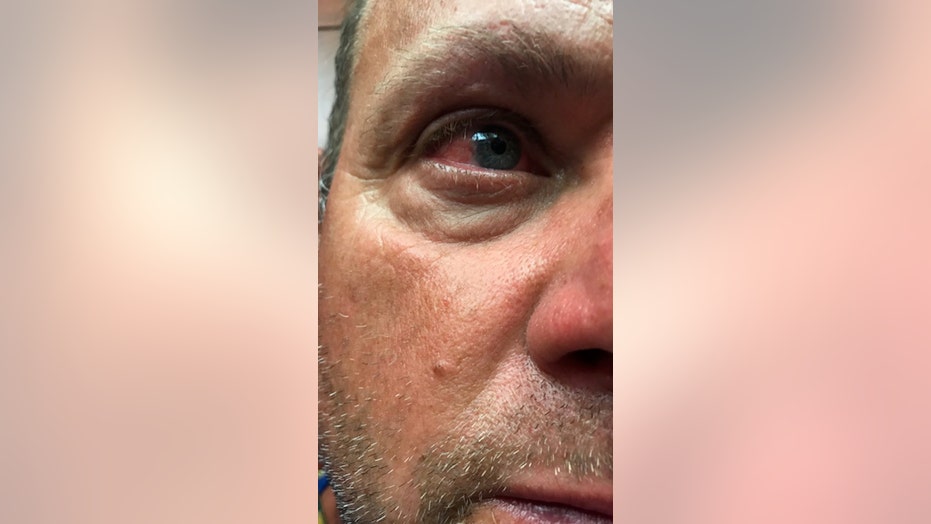 A New York man is seeking damages from the New York Mets for a severe eye injury he says occurred at a game and involved a T-shirt cannon.

Alexander Swanson, 54, of Smithtown, says in a lawsuit that he was knocked unconscious and nearly blinded when a T-shirt fired from the device hit him in the face at a Mets game in June.

“It could have killed me,” he told the New York Daily News. “It’s a hazard.”

Swanson took his three sons to the Mets' Citi Field to watch the team play the San Francisco Giants.

Alexander Swanson says in a lawsuit that he suffered an eye injury after being hit by a T-shirt fired from a T-shirt cannon.  (Ancona & Levine Attorneys)

The person operating the cannon appeared to be having trouble with the weapon and had lowered the muzzle when it discharged, according to the paper.

“The guy who shot the gun scampered away,” Swanson told the New York Daily News.

Alexander Swanson says he took his three sons to a Mets game in June when he was injured with a T-shirt cannon. (Ancona & Levine Attorneys)

His attorney Dustin Levine told Fox News on Monday that his client was hit at “point-blank range.”

“The cannon was operated and maintained in a grossly negligent fashion and caused Mr. Swanson to be hit by a projectile that is estimated to be traveling at half the speed of a bullet fired from a 9mm pistol,” Levine said.

“My client was enjoying what he thought was a perfect day with his three sons and ended up suffering a severe injury that will likely affect the rest of his life,” he said.

The Mets did not respond to a message seeking comment.