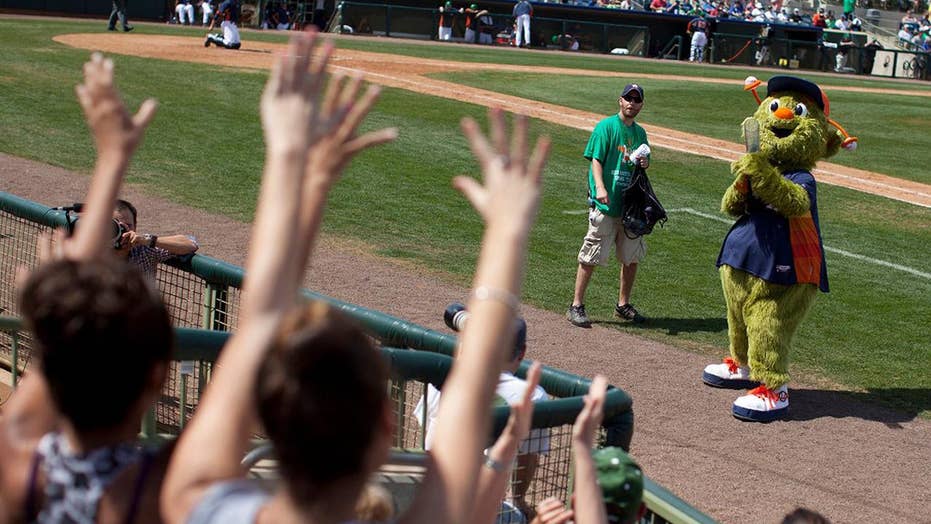 A lawsuit being filed against the Houston Astros, claims the team's mascot, Orbit, fired a t-shirt cannon into the crowd during a game last season, breaking a woman's finger.

The Houston Astros are facing a lawsuit alleging the team’s mascot, Orbit, fired a T-shirt cannon during a game last season and broke a woman’s finger.

Jennifer Harughty claimed in the lawsuit that Orbit “shattered” her left index finger during a July game when a T-shirt fired from a “bazooka-style” cannon in the stands hit her finger, the Houston Chronicle reported Tuesday.

HOME PLATE UMPIRE SLAMMED FOR ANTICS DURING ASTROS GAME: ‘I CAN DO WHATEVER I WANT’

The team said in a statement it was “aware” of the lawsuit and the allegations against Orbit.

“We do not agree with the allegations. The Astros will continue to use fan popular T-shirt launchers during games. As this is an ongoing legal matter, we will have no further comment on this matter,” the statement said.

Harughty was sitting in the middle deck behind the third baseline of Minute Maid Park when the incident occurred, the Houston Chronicle reported, citing court records. She claimed that the fracture required two surgeries.

Despite the surgeries and physical therapy, Harughty alleges that the finger still isn’t right and “remains locked in an extended position with little to no range of motion.”

The lawsuit accused the Astros of being negligent and not using reasonable care when Orbit fired the T-shirt cannon. They are also accused of failing to provide warnings to fans about the risk the cannon poses.

The woman is seeking more than $1 million in her lawsuit.