ATLANTA – The Knicks no longer have their massive losing streak and no longer are the NBA’s worst team. Happy Valentine’s Day.

When it was over, Coach David Fizdale’s wife, Natasha, flew into the arms of a Knicks staffer. Indeed, her husband needed this night.

In their final game before the All-Star break, the Knicks charged to a 14-0 lead and upset the Hawks, 106-91, at State Farm Arena on Thursday in snapping their franchise single-season record 18-game losing streak.

Fizdale can savor it on a Caribbean beach with no games until next Friday against the Timberwolves, preserving an 11-47 record that is no longer the league’s rock bottom. They have eked past the Suns (11-48).

“We hung in despite the losses we had faced all the way to the break,’’ Fizdale said. “I keep talking about this team’s character, it would’ve been very easy for us to check out and get on to wherever we were going to go. But we [were] desperate men. Those guys wanted that game really badly and they came out and they showed it.”

Before Thursday, their most recent victory had come nearly six weeks ago on Jan. 4 in Los Angeles against the LeBron James-less Lakers. The streak extended through the franchise-altering Kristaps Porzingis trade.

The key piece obtained in the Porzingis deal, Dennis Smith Jr., broke out of a recent funk with a sensational night in his first win as a Knick. He scored 19 points with seven assists, making 7-of-10 shots and badly outplayed rookie Hawks point guard Trae Young (6-of-19, three turnovers). Smith was 0-6 with the Knicks before Thursday’s win.

“Super satisfying,’’ Smith said. “We came in, me and [DeAndre Jordan] came into a situation with a team on a losing streak and obviously it was up to us to change it. It took us a little minute to do it, but now we finally turned it around. We’ll try to get on the opposite side of that hill, start moving in a good direction.” 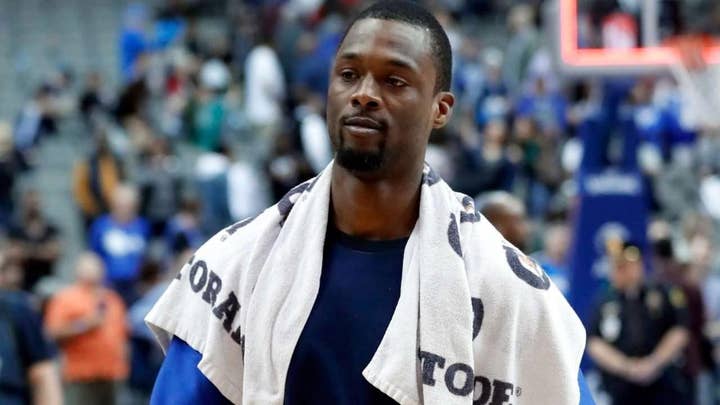 Backup point guard and two-way G-Leaguer Kadeem Allen continued to excel off the bench, adding 14 points and nine assists, and newcomer John Jenkins scored 14 points. Their emergence will give Fizdale a lot to think about when injured point guards Frank Ntilikina and Emmanuel Mudiay return after the break.

This was a night of celebration, though Fizdale said the locker room didn’t go nuts — even if the Knicks were 2-31 in their past 33 contests.

“It was great, but it wasn’t overreaction,’’ Fizdale said. “I think they know that we’ve been beating on the door. I think the gratification getting over the hump finally with our defense. That’s a heck of a team.”

The Hawks, who had been a respectable 7-9 in their previous 16 games, shot 6-of-29 in the first quarter and scored 13 points. They finished shooting just 36.3 percent.

“We just played a complete game,’’ said Kevin Knox, who scored nine points with 10 rebounds. “We played 48 minutes together on offense and defensively, playing the great rotations, on-ball defense, challenging at the rim. We did a really good job staying together for 48 minutes.

After not scoring in the game’s first five minutes, the Hawks (19-39) rallied in the second quarter and tied the game at 51 on a Young 3-pointer with 50 seconds left in the half but never took the lead.

“We go up 14-0, they come all the way back and really made it a game,’’ Fizdale said. “How do we respond to that? I thought our response coming out of the half was really good.’’

Damyean Dotson (13 points), one of six double-figure scorers, hit a corner 3 to send the Knicks into halftime up 54-51.

The Knicks held off the Hawks late in the third. Allonzo Trier gave the Knicks a 79-72 lead with a 3-pointer in the final minute after Luke Kornet, who had missed 13 of his first 14 shots, finally buried a 3.

Red-hot rookie center Mitchell Robinson put in his own miss and then dunked a follow. Meanwhile, Young got called for a charge in the backcourt and the Knicks entered the final period up 82-73 and never had to sweat in the final period.

“Obviously it feels good for me,’’ Fizdale said. “But I’m on to vacation now. I’m going to let this one go and get ready for the first one coming out.’’