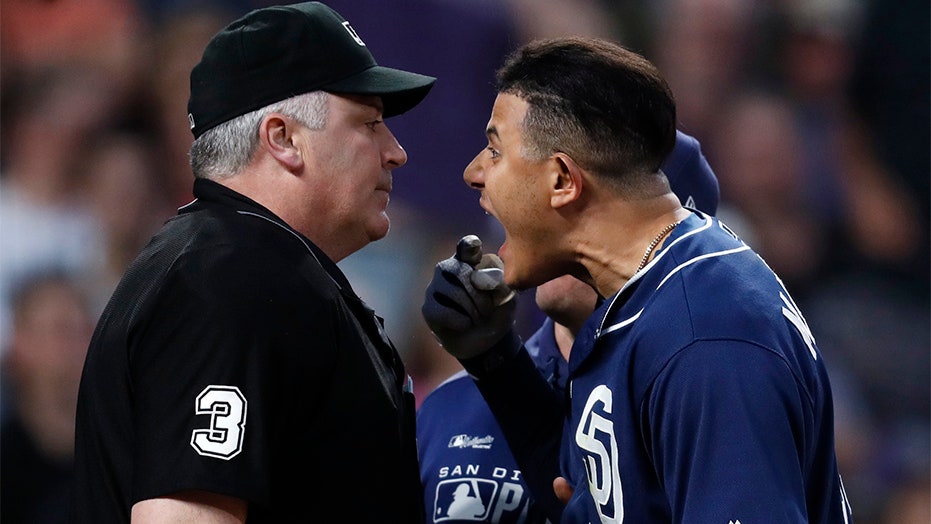 Major League Baseball and the umpires union are publicly feuding after the latter accused San Diego Padres star Manny Machado of committing “violence in the workplace” following his ejection over the weekend during a game against Colorado.

The MLB Umpires Association, in a tweet Tuesday, said: “Machado received a one-game suspension for contact with an umpire over balls and strikes and VIOLENTLY throwing his bat against the backstop with absolutely no regard to anyone’s safety.”

It continued: “Violence in the workplace is not tolerated, and offenders are dealt with severely and even made examples of for the good of its employees, as well as the company itself.

"Is this truly what MLB wants to teach our youth?”

San Diego Padres' Manny Machado, right, yells at home plate umpire Bill Welke after Welke called Machado out on strikes in the fifth inning of the team's baseball game against the Colorado Rockies on Saturday in Denver. (AP)

The MLB hit back Tuesday night saying the Umpires Association overstepped with its remarks.

“Mr. Machado is appealing his suspension and we do not believe it is appropriate for the union representing Major League Umpires to comment on the discipline of players represented by the Players Association,” the press release said. “We also believe it is inappropriate to compare this incident to the extraordinarily serious issue of workplace violence.”

Machado, who claims he did not touch home plate umpire Bill Welke while disputing a called third strike in the fifth inning, says he is waiting for his appeal and wouldn’t comment on the umpires’ tweet.

“I’ve got the MLB and the Padres and ownership behind me on this,” he said. “We’re all on the same page and we’re going to move forward from this.”