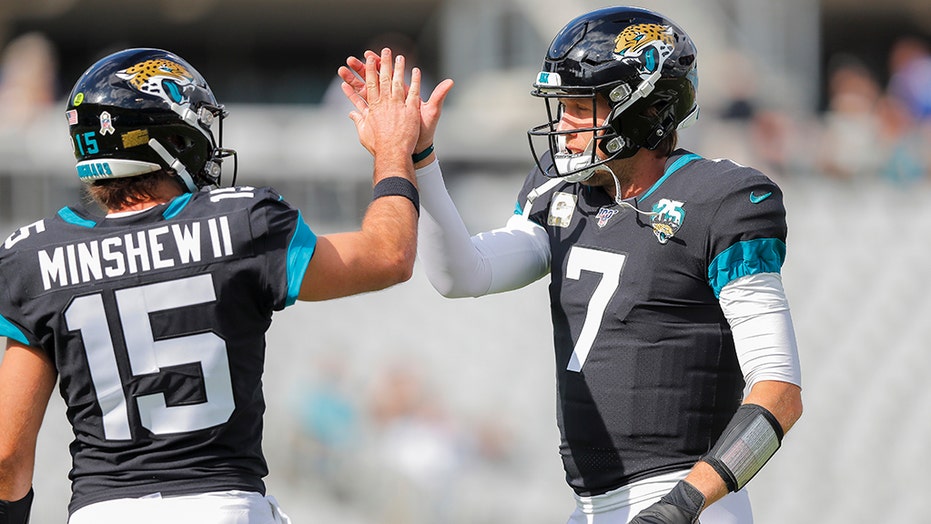 Minshew Mania is alive again in Jacksonville a bit earlier than expected following the benching of quarterback Nick Foles in Sunday's game between the Jaguars and Tampa Bay Buccaneers.

With Jaguars fans shouting "we want Minshew" and the team trailing the Buccaneers by 25 points at halftime, the coaching staff decided to make a change and bring back Gardner Minshew, the rookie quarterback who took the league by storm earlier in the season with his exciting play and signature mustache.

A Jacksonville Jaguars fan holding a sign about Gardner Minshew during the first quarter of a game at TIAA Bank Field on Dec. 1. (Photo by James Gilbert/Getty Images)

Since Foles returned from a broken collarbone injury two weeks ago, he has struggled behind Jacksonville's offensive line. On Sunday, he completed just six passes for 82 yards.

NICK FOLES WILL START FOR JAGUARS OVER MINSHEW AFTER BYE WEEK

He was also sacked three times and committed three first-half turnovers for a 34.8 passer rating.

Jacksonville Jaguars quarterback Nick Foles (7) looks for a receiver against the Tampa Bay Buccaneers during the first half of an NFL football game, Sunday, Dec. 1, 2019, in Jacksonville, Fla. (AP Photo/Stephen B. Morton)

Jacksonville has yet to win a game with the former Super Bowl-winning quarterback, which could be attributed to his lack of movement in the pocket behind a below-average offensive line, young linebackers, the team's failure to get a consistent running game and the lack of chemistry he's had with the wide receivers due to his injury.

The Jaguars have also been plagued with the injury bug and its defense isn't the same this year after losing players like LB Telvin Smith, DT Malik Jackson, CB Jalen Ramsey and FS Tashaun Gipson for various reasons.

Foles signed with the Jaguars this past March to a four-year, $88 million contract with just over $50 million guaranteed before suffering the broken clavicle during the team's first game of the season against the Kansas City Chiefs.

Minshew came off the bench that game and took the NFL by storm, creating a phenomenon the city hadn't seen in a long time. He started eight games this season, completing 61.2 percent of his passes for 2,285 yards -- while throwing 13 touchdowns and just four interceptions.

Gardner Minshew #15 of the Jacksonville Jaguars and Nick Foles #7 warm up before the start of a game against the Tampa Bay Buccaneers. (Photo by James Gilbert/Getty Images)

On Nov. 3 in London, Minshew had essentially a one-game audition to keep his job, with Foles returning from injury. But the rookie had arguably his worst game of the season, turning the ball over four times in the Jaguars 26-3 loss.

In the second half on Sunday, he showed a bit of that magic the team has been missing over the past few weeks.

With Minshew back for the Jags and the team likely to miss the playoffs, it's now up to the coaching staff to determine if they stick with the rookie or go back to the Super Bowl-winning QB.