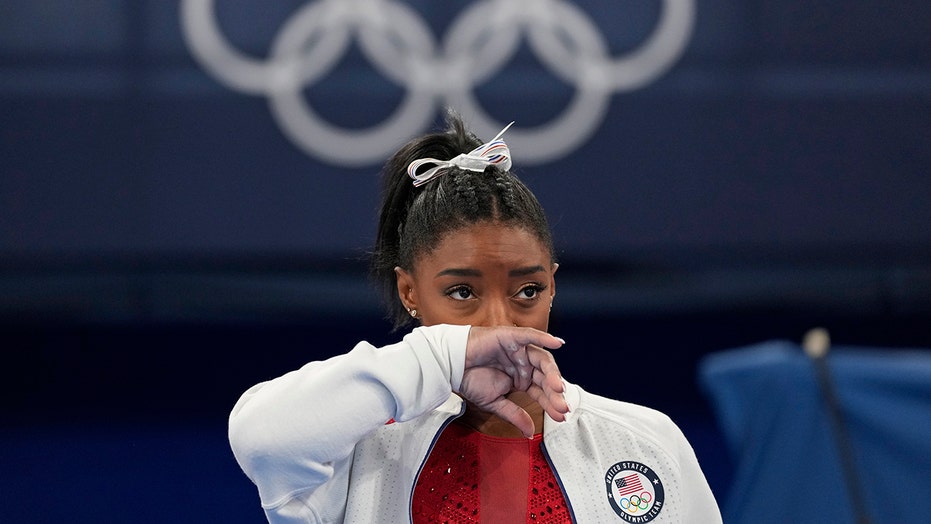 Simone Biles understands now that she was struggling long before she arrived at the Tokyo Olympics, where the unofficial face of the Games and one of the greatest gymnasts of all time was unable to force a smile and push her way through on the world's biggest stage.

Biles had persevered through the widespread sexual and emotional abuse scandal that rocked the gymnastics community. She continued her intense training and preparation for the Olympics through its yearlong pandemic delay.

She was fine, she convinced herself.

But when the seven-time Olympic medalist stepped onto the floor in July for the women's team final, she was not fine. Biles was suffering from "the twisties," a phenomenon in which she'd lost her sense of air because her mind and body could not sync, and she walked off the floor.

"I think it’s definitely pent up emotions, aggressions for the past couple of years, trauma that led to that moment of once I got on the global scene, it just cracked," Biles said.

Recognizing that she was not in the right head space to compete safely, Biles ultimately pulled out of four events. She returned to win a bronze medal on the beam, but that shiny piece of hardware represented a much larger victory for Biles.

Her very public admission that she was struggling, which followed a decision months earlier by tennis player Naomi Osaka to withdraw from the French Open and not play Wimbledon, redefined the mental health discussion that’s been coursing through sports.

"I gave so many opportunities to a lot of the athletes there," Biles said of the impact her decision made on others.

Michael Phelps, retired swimmer and winner of a record 23 gold medals, said the day after Biles walked off the floor in Tokyo that the gymnast had shown "it is OK not to be OK." Phelps has long been public about his own mental health struggles — including acknowledging he contemplated suicide after the 2012 Olympics — but Biles blew the discussion wide open.

Athletes over the last few years had started to publicly address anxiety, depression and suicidal thoughts they experienced. But heightened by the strains of the pandemic and the support shown to both Biles and Osaka, the toughest of the tough are no longer "shaking it off," or any of the cliché things athletes are supposed to do.

In the last three months:

— Atlanta Falcons receiver Calvin Ridley stepped away from the game in October to "focus on my mental wellbeing," he wrote on social media. "This will help me be the best version of myself now and in the future."

— Tennessee Titans receiver A.J. Brown shared a video on the one-year anniversary of the day he considered suicide to deal with depression he was battling during a breakout 2020 Pro Bowl season. "I just wanted to put out a positive message that I’m still here. I’m still growing. I’m still learning."

— Philadelphia Eagles left tackle Lane Johnson missed three games to address depression and anxiety. "I was living in hell for a long time. Don’t bottle it up. And it’s easy to do that. It’s easy to avoid the situations that you don’t want to go through."

— Bianca Andreescu, the 2019 U.S. Open champion, said she would take a mental break from tennis and sit out the start of next season to "re-set, recover, and grow" after a challenging two years that included contracting COVID-19. "I could not detach myself from everything that was going on off the court; was feeling the collective sadness and turmoil around and it took its toll on me," the 21-year-old Canadian wrote on social media.

— Formula One driver Valtteri Bottas broke from his normal private nature on a podcast to discuss mental health struggles that nearly caused him to quit racing. Bottas called the podcast "therapeutic" and said he did it for fans in his native Finland because "normally I haven't shared much underneath the skin... I think they have a right to know me a bit better as a human being."

Greg Miller, a licensed professional counselor for Thriveworks in Cherry Hill, New Jersey, noted the focus on mental health is not entirely new and previously was championed by Kareem Abdul-Jabbar. He also pointed to Royce White, who talked openly of his struggles while playing basketball at Iowa State but as an NBA rookie in 2012 refused to play because the league lacked a comprehensive mental health program. Royce was, according to Miller, a "canary in the coal mine" nearly a decade ahead of his time.

While Biles and Osaka helped blow the conversation open, Miller believes stigmas surrounding mental health won't go away. Athletes, particularly male ones from traditional sports championed in the fabric of America, will still struggle to seek help when needed.

"We’re taught as men to be individuals who take care of things with grit and resilience, not community and vulnerability," Miller said. "There are pockets of people in the country who see individuals talking about their feelings as weak or lacking masculinity in general. What you’re seeing playing out among male athletes now is nothing new to any man who has ever dealt with mental health issues; it has been happening to men across the country for generations.

"We, as a collective society, need to take a look at ourselves and decide whether an open conversation about mental health is strength-based or not. Until that happens, male athletes — and men as a whole — will continue to experience difficulty discussing mental health challenges."

The NBA has a "Mind Health" program and the NFL and NFL Players Association in 2019 formed a mental health and wellness committee. Minnesota Vikings general manager Rick Spielman earlier this month urged organizations to invest in support systems following an incident in which defensive end Everson Griffen called police to his home and then refused to leave; Griffen has since revealed he's bipolar.

Most leagues do indeed now have robust mental health and counseling services.

Nearly six months removed from her own public dealings with mental health struggles, Biles said "I’m honestly kind of OK that it happened" because it led to her receiving the help she didn't recognize she needed. Had it not all come to a head on a gymnastics mat in Tokyo, her trauma would have followed her.

"Your mind and body will stop before you do. My mind and body were intact with everything that I was feeling, and it was very alarming," she said. "It told me like, ‘Hey, enough is enough, you’ve got to go get help.' I would have probably kept suppressing it for probably the rest of my life."