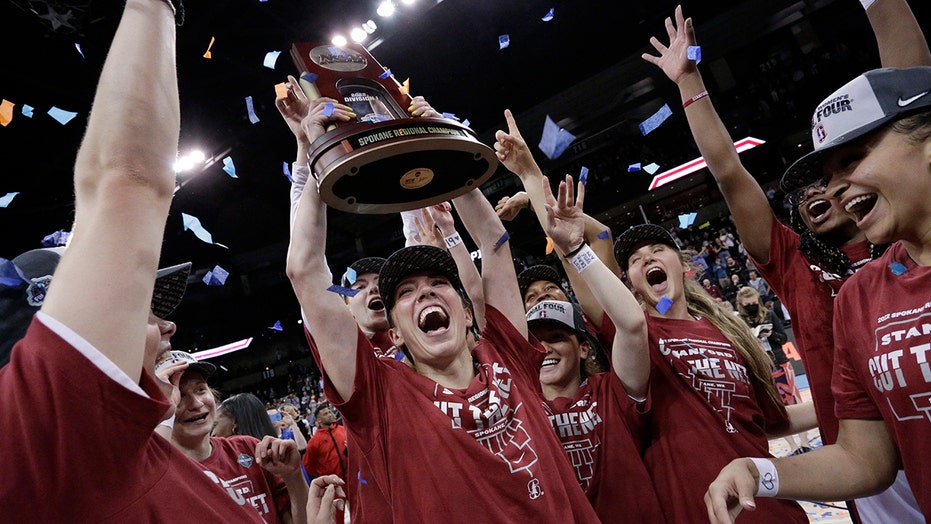 Standing at the top of the ladder, Lexie Hull got the final snip with the scissors, drawing one of the loudest cheers of the night as she draped the net around her neck.

Hull did all she could to get defending national champion Stanford back to her hometown for the Spokane Regional. Then, she became the catalyst for getting the Cardinal back to the women's Final Four.

"I’m just super proud of our team for staying with it, sticking with each other and being gritty," Hull said. "I think it really comes down to who was the grittier team."

Hull scored 20 points, including a key three-point play inside the final three minutes, and Haley Jones hit four free throws in the closing moments to finish with 18 points in top-seeded Stanford's win over No. 2 seed Texas 59-50 on Sunday night.

Stanford players celebrate with the regional trophy after they beat Texas 59-50 in a college basketball game in the Elite 8 round of the NCAA tournament, Sunday, March 27, 2022, in Spokane, Wash. Stanford won 59-50. (AP Photo/Young Kwak)

The Cardinal will play in the national semifinal for the 15th time in program history, facing either North Carolina State or Connecticut in Minneapolis.

This Elite Eight matchup was tightly contested throughout and reinforced the resolve that Stanford was missing earlier in the season when it lost to Texas at home on the night it received its rings from the 2021 championship.

Stanford (32-3) was the tougher team this time around, especially in the second half.

Hull made a key 3-pointer early in the fourth quarter and the three-point play gave Stanford a 53-48 lead with 2:29 remaining. Texas never got closer than two in the closing seconds and Stanford spent the final moments celebrating around Hull and her twin sister Lacie.

Then came the real celebration afterward that included the team doing the Electric Slide. It was VanDerveer's idea, and she even joined in.

"I think everybody killed it today," Jones said.

Cameron Brink added 10 points for Stanford, all in the third quarter, and the Cardinal extended the longest win streak in the country to 24 games. Brink was also a force at the defensive end with six blocks, half coming in the third quarter when Stanford went to a zone defense.

"Good teams adjust at the end of the day, and they made an adjustment and went to zone," said Texas' Joanne Allen-Taylor, who led the Longhorns with 15 points before fouling out. "We just didn’t make enough plays in the zone at the time."

Texas (29-7) lost in the Elite Eight for the second straight season; last year's unexpected run as a No. 6 seed stopped with South Carolina.

Rori Harmon, the Big 12 freshman of the year, was limited to 14 points and Audrey Warren added 11 points off the bench. Texas' second-longest win streak in the country was snapped at 14 games.

"They’re really good, no question about it. You let them do what they want to do, they’ll hang 70, 80 points on you," Texas coach Vic Schaefer said. "I think you’ve got to give our kids credit because they didn’t let them do what they wanted to do. They really played their guts out today, and they played the way we wanted to play. And we just couldn’t score enough points."

Stanford’s return trip to the Final Four keeps alive the hope of being the first team other than Connecticut to repeat as national champions since Tennessee in 2007 and 2008. But the Cardinal had to get through the fourth quarter — both Sunday and in November.

Texas thrived in the fourth in the first meeting, trailing by five to start the quarter that day before outscoring the Cardinal by 10 for a 61-56 victory.

On Sunday, Texas also trailed by five to start the fourth and pulled within three on an Allen-Taylor jumper. It took Stanford nearly three minutes into the quarter before Lexie Hull hit an open 3-pointer from the wing — just the third 3 of the game of the Cardinal.

That’s when Hull drove to the rim and scored while being fouled for what proved to be the decisive points. The Cardinal made 6 of 8 free throws in the final two minutes.

Texas: The Longhorns were in the Elite Eight for the 11th time in program history, but have not been to the Final Four since 2003. Schaefer has coached in the Elite Eight in five straight tournaments but has lost his last three regional final games.

"We were supposed to be here this year in my mind," Schaefer said. "We were playing good. We’re one of the best eight teams in the country. I don’t think there is any doubt about it."

Stanford: The Cardinal have not lost since falling to South Carolina on Dec. 21. They may get a chance at seeing the Gamecocks again, but it would be in the national title game.