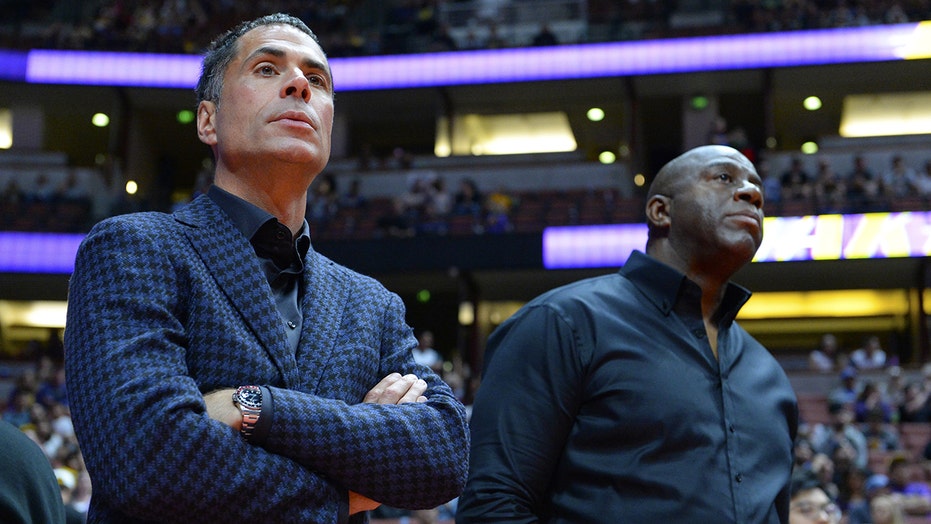 Johnson appeared on ESPN’s “First Take” to discuss what led to his stunning departure in April. He said he was tired of all the “backstabbing” going on in the organization and some people were telling him Pelinka was talking about Johnson behind his back.

“If you're going to talk betrayal, it's only with Rob,” Johnson said. “But, again, I had to look inside myself. I had been doing that for months. Because I didn't like that Tim Harris [Lakers executive] was too involved in basketball. He's supposed to run the Laker business, but he was trying to come over to our side. Jeanie [Buss has] gotta stop that. You gotta stop people from having those voices.”

Then, Johnson said, he started to hear rumors that he wasn’t “working hard enough.”

“Things got going in the right direction, and then I start hearing, you know, 'Magic, you're not working hard enough. Magic's not in the office,'" Johnson said. "So people around the Laker office was telling me Rob was saying things -- Rob Pelinka -- and I didn't like those things being said behind my back, that I wasn't in office enough and so on and on."

Johnson said the final straw came during the firing of coach Luke Walton. Johnson said he wanted to fire Walton, but then realized he didn’t have the power he thought he had to fire him.

“…I told them, ‘When it's not fun for me, when I think that I don't have the decision-making power that I thought I had, then I gotta step aside,’” Johnson said.

Lakers star LeBron James revealed on his TV show earlier this month that he learned Johnson was leaving through a friend -- not from Johnson himself, something the basketball great also talked about Monday.

“I respect LeBron for what he just said,” Johnson said. “I love LeBron, I love his family...but sometimes as a man, you have to make decisions based on your well-being. And I made that decision.”

Rob Pelinka, general manager of the Los Angeles Lakers talks to Earvin Magic Johnson, president of basketball operations of the Lakers before the game against the Minnesota Timberwolves on September 30, 2017 at the Honda Center in Anaheim, California. (Photo by Robert Laberge/Getty Images)

Johnson announced he was stepping down from the Lakers prior to the team’s regular-season finale against the Portland Trail Blazers. He told reporters he “wanted to go back to having fun.”

The Lakers, have won 16 NBA championships, second only to the archrival Boston Celtics, but have not made the playoffs since 2013. Johnson won five titles with the Lakers in the 1980s before retiring abruptly in 1991, when he announced he had contracted HIV. He returned to coach the team for 16 games during the 1993-94 season and played in 32 games during the 1995-96 season, largely off the bench.

Johnson has enjoyed a prosperous post-playing career, with many business interests along with ownership stakes in the Los Angeles Dodgers and Los Angeles FC.