NBA superstar LeBron James was allegedly “stunned” when he discovered Magic Johnson announced Tuesday that he was resigning as Lakers president of basketball operations.  (AP/Getty Images)

Sources told USA Today Sports that James had no idea Johnson was leaving the team while ESPN reported that the NBA All-Star was “completely caught off guard” by the announcement.

“Normally, LeBron is very up-to-date on what happens in an organization,” ESPN’s Brian Windhorst said. “He doesn’t always get to make the calls, but he always knows first. This has never happened to him before.”

A source told ESPN that James stands behind Jeanie Buss, the president of the Los Angeles Lakers and the franchise.

Johnson, 59, who played for the Lakers for 13 seasons, announced Tuesday he was stepping down citing his desire to return to the simpler life he enjoyed as a businessman. He reportedly did not tell Buss or general manager Rob Pelinka about his shocking decision before he announced it in front of reporters about 90 minutes before the final game of the Lakers’ sixth consecutive losing season. 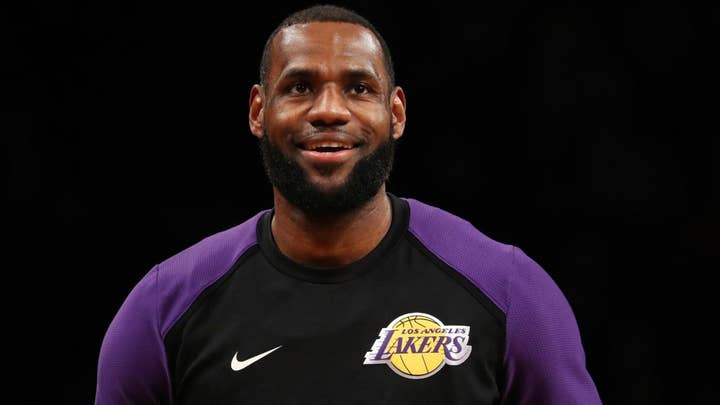 James credited Johnson with closing the deal that sent him to the Lakers from the Cleveland Cavaliers. However, James struggled with a groin injury that limited him to 55 games this season and the Lakers fell out of the playoff race following the All-Star break as rumors of an aborted trade for New Orleans Pelicans star Anthony Davis and its affect on the young Lakers team swirled in the media.

The Lakers have won 16 NBA championships, second only to the archrival Boston Celtics, but have not made the playoffs since 2013. Johnson won five titles with the Lakers in the 1980s before retiring abruptly in 1991 by announcing that he had contracted HIV. He returned to coach the team for 16 games during the 1993-94 season and played in 32 games during the 1995-96 season, largely off the bench.

Johnson has enjoyed a prosperous post-playing career, with many business interests along with ownership stakes in the Los Angeles Dodgers and Los Angeles FC.

Fox News Samuel Chamberlain and The Associated Press contributed to this report.