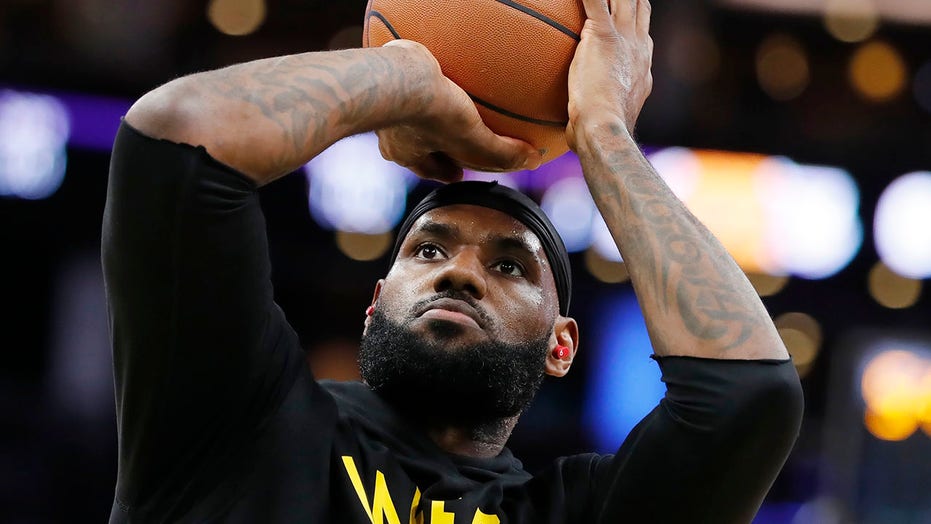 LeBron James addressed the harsh criticism he received from Boston Celtics center Enes Kanter after their matchup on Friday night and said the outspoken player had an opportunity to talk to him.

Kanter had accused James of bowing down to the Chinese government and taking "money over morals" in a tweet before their matchup. The Los Angeles Lakers superstar was asked about Kanter’s criticism.

Los Angeles Lakers' LeBron James (6) looks for a call against the Boston Celtics during the second half of an NBA basketball game, Friday, Nov. 19, 2021, in Boston. (AP Photo/Michael Dwyer)

"I don't give too many people my energy," James said, via Yahoo Sports. "He's definitely not someone I would give my energy to. He's trying to use my name to create an opportunity for himself.

"I definitely won't comment too much on that. ... He's always had a word or two to say in my direction, and as a man, if you've got an issue with somebody, you really come up to him. He had his opportunity tonight. I saw him in the hallway, and he walked right by me."

Kanter has used his platform in recent weeks to rail against the Chinese government over the treatment of Uyghur Muslims and has called for the freedom of Tibet, Hong Kong and Taiwan. Kanter has worn sneakers promoting his own geopolitical initiatives, though he hasn’t seen much playing time.

James has been one of the most active voices in the social justice landscape over the last few years. The Lakers superstar founded the I Promise School and invested $20 million earlier this year to help rebuild the Akron, Ohio, neighborhood he grew up in. He’s made his thoughts known on the murder of George Floyd, an Ohio teen who was shot dead by a police officer and the Kyle Rittenhouse trial.

The Los Angeles Lakers bench looks on during the second half of an NBA basketball game against the Boston Celtics, Friday, Nov. 19, 2021, in Boston. (AP Photo/Michael Dwyer)

But when it comes to geopolitical issues, James has been noticeably quiet.

James wasn’t quick to say anything when Daryl Morey, who was then the Houston Rockets general manager, tweeted in 2019 "Fight For Freedom. Stand with Hong Kong." The tweet led to a Chinese government crackdown on NBA games being shown in the country.

"I’m not here to judge how the league handled the situation," James initially said in October 2019. "I just think that, when you’re misinformed or you’re not educated about something – and I’m just talking about the tweet itself – you never know the ramifications that can happen. We all see what that did, not only did for our league but for all of us in America, for people in China as well. Sometimes you have to think through the things that you say that may cause harm, not only for yourself but for the majority of people. I think that’s just a prime example of that."

He added in a tweet: "My team and this league just went through a difficult week. I think people need to understand what a tweet or statement can do to others. And I believe nobody stopped and considered what would happen. Could have waited a week to send it."

James on Friday played his first game since suffering an abdominal injury on Nov. 2. He scored 23 points but Boston picked up the win 130-108.