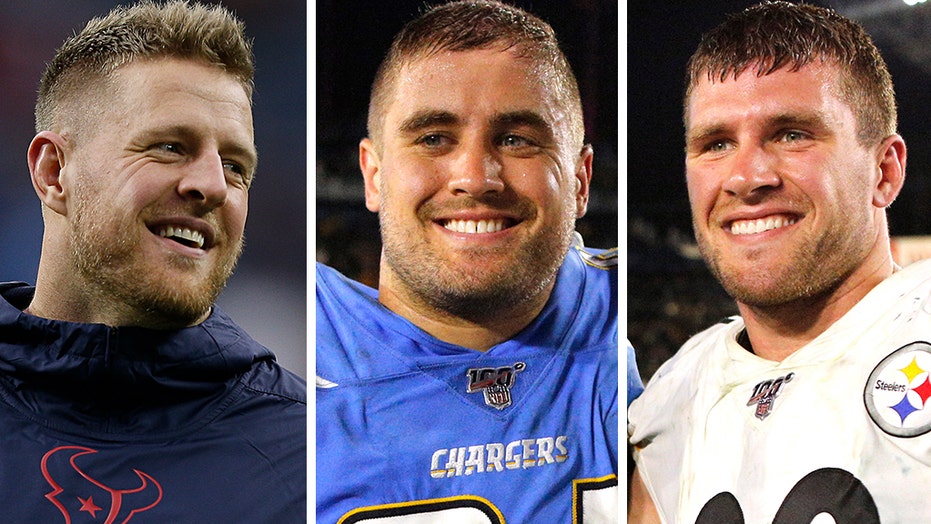 J.J. Watt and his two brothers will make history Sunday when the Houston Texans take on the Pittsburgh Steelers.

J.J. Watt, T.J. Watt, and Derek Watt will become the third trio of brothers to appear in an NFL game joining the likes of Tremaine Edmunds, Trey Edmunds and Terrell Edmunds and Joe Rooney, Cobb Rooney and Bill Rooney.

FLASHBACK: NFL BROTHERS TO ACCOMPLISH FEAT FOR FIRST TIME SINCE 1927

J.J. Watt is a defensive end for the Texans. T.J. Watt is a linebacker and Derek Watt is a fullback for the Steelers. Interestingly enough, the Steelers are involved in this historic moment for the second time as Trey and Terrell Edmunds were on the team last year when they played the Tremaine Edmunds’ Buffalo Bills team.

The Rooney brothers completed the feat in 1927 for the Duluth Eskimos.

“It's always great when we can see two of them at once, rather than try and juggle which game are we going to go to and watch, and which game we are going to tape and watch later or have two televisions going,” Connie Watt, their mother, said, according to the Steelers’ website. “It's always great to see them together. In the past when two of them played against each other, they always tried to get together the night before. It's definitely a different game when they are able to play together or against each other.

“It's something we treasure. It's a remarkable experience. We are all excited.”

The Texans selected J.J. Watt with the No. 11 pick of the 2011 draft. He’s already been a three-time Defensive Player of the Year award winner and a five-time first-team All-Pro selection.

The Steelers selected T.J. Watt with the No. 30 pick of the 2017 draft. He’s earned himself two Pro Bowl selections and one first-team All-Pro selection.

It will be the first time all of the Watt brothers will be playing in the same game.

“We wanted it more than anything,” John Watt, their father, said, according to the Steelers’ website. “It might be the only time it's going to happen, who knows. Hopefully, there will be more.”

Their game kicks off at 1 p.m. ET on Saturday.