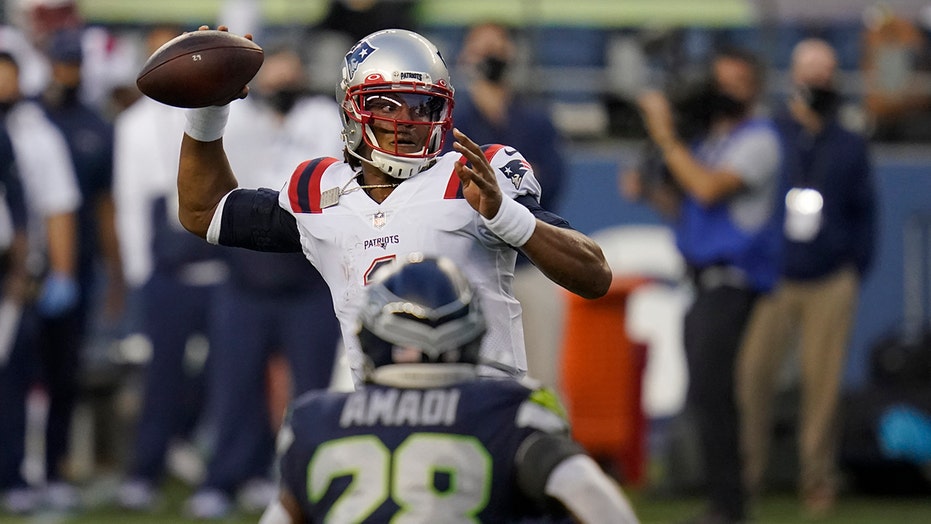 The third week of the NFL season kicks off Thursday night with the battle for Florida between the Jacksonville Jaguars and the Miami Dolphins.

Gardner Minshew II will try to keep his hot streak going against the Dolphins, which have underperformed in their first two games of the season.

Some of the other matchups include: the Buffalo Bills vs. Los Angeles Rams, New England Patriots vs. Las Vegas Raiders, Seattle Seahawks vs. Dallas Cowboys, and finishing the week Monday with the Baltimore Ravens vs. Kansas City Chiefs.

Here’s what to know about Week 3 of the NFL season.

Jacksonville Jaguars tight end Tyler Eifert (88) is congratulated by quarterback Gardner Minshew, right, after teaming up for a 19-yard touchdown pass against the Tennessee Titans in the first half of an NFL football game Sunday, Sept. 20, 2020, in Nashville, Tenn. (AP Photo/Mark Zaleski)

The Jaguars come into the first game of the week looking to put the Dolphins away with ease. Gardner Minshew was 30-for-45 with 339 passing yards, three touchdowns, and two interceptions in a three-point loss to the Titans last week. The Dolphins will go with Ryan Fitzpatrick as the starter even as the team moved to 0-2 last week,

Atlanta Falcons quarterback Matt Ryan (2) throws a pass in the second half of an NFL football game against the Dallas Cowboys in Arlington, Texas, Sunday, Sept. 20, 2020. (AP Photo/Ron Jenkins)

The Falcons are desperately in need of righting their ship after last week’s debacle against the Cowboys. The Bears are undefeated going into the game, though their sloppiness against the Giants probably won’t hold up against a hungry Atlanta squad.

A matchup of two undefeated teams, the Bills welcome the Rams to Buffalo. Josh Allen had a great game against the Dolphins in a win last week. The Rams will try to stay undefeated as well.

Washington Football Team head coach Ron Rivera talks with his players during the second half of an NFL football game against the Arizona Cardinals, Sunday, Sept. 20, 2020, in Glendale, Ariz. (AP Photo/Darryl Webb)

Baker Mayfield appeared to bounce back against in the Browns' win over the Bengals last week and will host Washington on Sunday. The Browns looked great in their first win. Washington was bounced by the Cardinals in Week 2.

The Vikings didn’t expect to start 0-2 this season and will have to hope their defense doesn’t take too much of a hit on their defense after losing Anthony Barr. The Titans escaped their first two wins by a field goal. Look for both teams to play a bit harder.

The Cam Newton-led Patriots looked great against the Seahawks in a loss last week and now will have to play a red-hot Raiders team. Las Vegas’ Derek Carr has been great in his first two games. He has four touchdown passes, 523 passing yards, and zero interceptions.

The Giants and 49ers look a little worse for wear heading into the third week. New York lost Saquon Barkley and Sterling Shepard to injuries while the 49ers have a bunch of starters out for the season. If New York wants to get its first win of the season, this might be the best chance.

Philadelphia Eagles' Miles Sanders runs for a touchdown during the first half of an NFL football game against the Los Angeles Rams, Sunday, Sept. 20, 2020, in Philadelphia. (AP Photo/Laurence Kesterson)

We might get a winner in this one. Bengals rookie Joe Burrow looked good in his first two games but has yet to get the elusive ‘W.’ Carson Wentz was virtually booed in last week’s loss. The Eagles definitely need a win to quiet some of the noise that’s around the team.

The Steelers got a bounce-back game from James Conner last week and picked up their second win. Houston has looked lost on offense and going against a tough Steelers defense in Week 3.

The Colts and Jets head into Week 3 in Indianapolis. The Jets have looked bad in their first two games and may not get their first win just yet. The Colts turned the page in Week 2 but lost Parris Campbell due to an injury.

Carolina Panthers quarterback Teddy Bridgewater (5) throws a pass during the second half of an NFL football game against the Tampa Bay Buccaneers Sunday, Sept. 20, 2020, in Tampa, Fla. (AP Photo/Jason Behnken)

The Chargers were very close to knocking off the Chiefs last week. Justin Herbert got the nod and looked good but may not get the nod in Week 3. That will be an interesting storyline coming in. The Panthers are still looking for their first win of the season.

Tampa Bay Buccaneers running back Leonard Fournette (28) runs off the field with quarterback Tom Brady (12) after Fournette ran 46-yards for a score against the Carolina Panthers during the second half of an NFL football game Sunday, Sept. 20, 2020, in Tampa, Fla. (AP Photo/Mark LoMoglio)

The Broncos will be without Drew Lock and Courtland Sutton going into the game against the Buccaneers. The team has been hit hard by injuries. Meanwhile, Tom Brady and the Buccaneers picked up their first win of the season last week and may have a cakewalk against the injury-plagued Broncos.

Kyler Murray and DeAndre Hopkins have turned the Cardinals into a division contender. The team welcomes the Lions to Phoenix. Detroit is still looking for its first win.

Dallas Cowboys quarterback Dak Prescott (4) celebrates running the ball for a touchdown as back judge Greg Meyer (78) looks on in the second half of an NFL football game against the Atlanta Falcons in Arlington, Texas, Sunday, Sept. 20, 2020. (AP Photo/Ron Jenkins)

The Seahawks looked good against the Patriots in their win last week and now welcome the Cowboys, who are coming off a comeback win over the Falcons. Russell Wilson and Dak Prescott will be in a shootout on Sunday afternoon.

Green Bay Packers' Chandon Sullivan celebrates his interception returned for a touchdown during the second half of an NFL football game against the Detroit Lions Sunday, Sept. 20, 2020, in Green Bay, Wis. (AP Photo/Morry Gash)

The Saints and Packers will be featured on Sunday night. The Saints lost to the Raiders on Monday night and the Packers have looked good to start the season. New Orleans will likely be without Michael Thomas again.

The game of the week will be between the Ravens and Chiefs. It will be a Lamborghini going up against the Ferrari. Both teams are undefeated. Both teams probably should have faced off against each other in the AFC title game last season. All eyes will be on Lamar Jacks and Patrick Mahomes on Monday.