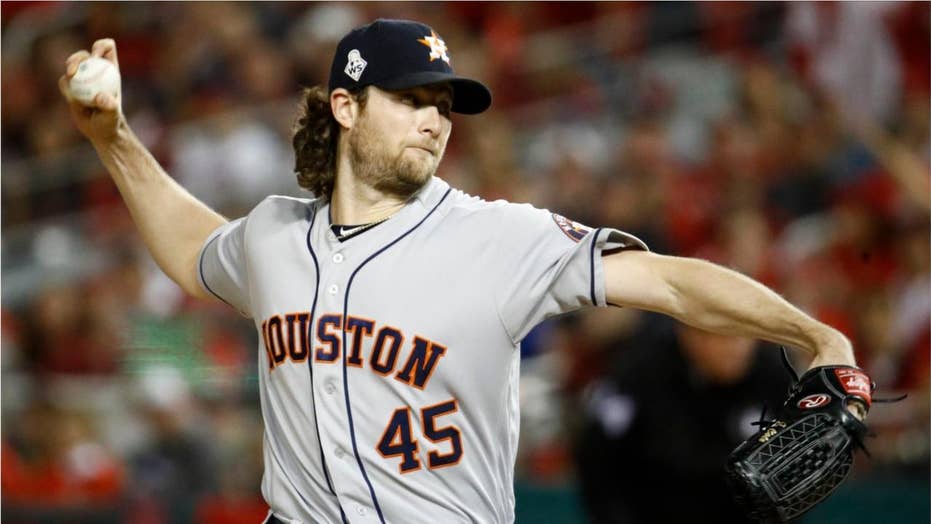 Gerrit Cole wears a cap with his agent, Boras Corp brand on it. The free agent is now distancing himself from Astros after their World Series loss.

Gerrit Cole, a pending free agent, wasted no time distancing himself from the Houston Astros Wednesday night as the star pitcher donned a baseball cap bearing his agent's logo and telling reporters he was "not an employee of the team."

Cole, one of the front-runners for the American League's Cy Young award this season, warmed up but did not appear for the Astros as they slipped to a crushing Game 7 defeat against the Washington Nationals in the World Series.

When he spoke to reporters after the game, Cole told an Astros spokesperson, "I'm not an employee of the team," before adding "I guess as a representative of myself..."

He subsequently told reporters he had made "a lot of good friendships" during his two years in Houston.

Houston Astros starting pitcher Gerrit Cole walks to the dugout after the third inning of Game 5 of the baseball World Series against the Washington Nationals Sunday, Oct. 27, 2019, in Washington.  (AP)

“Obviously l learned a lot about pitching from my teammates. From the pitching coaches and pitching staff. I learned a lot more about the game from [manager] A.J. [Hinch]. And it was just a pleasure to play in the city of Houston," he said.

He also donned a hat bearing the logo of Boras Corp, the company of superagent Scott Boras.

Speaking after the game, Hinch said his decision to opt for pitcher Will Harris, which ultimately led to the Nationals seizing the lead, was "a decision I'll have to live with."

"I wasn't going to pitch him [Cole] unless we were going to win the World Series and have a lead," Hinch said. "He was going to help us win. He was available, and I felt it was a game that he was going to come in had we tied it or taken the lead."

Speculation has mounted that Cole, a native of Southern California who amassed 326 strikeouts this season, may return to his home state next season, possibly for the Angels or Dodgers. The New York Yankees are also expected to be in play for what is expected to be a record free agent contract for a starting pitcher.

The Nationals won in come-from-behind fashion, smacking a pair of home runs in the seventh inning on their way to a 6-2 win in the final game of a Fall Classic that saw the visiting team win all seven games. Washington starting pitcher Stephen Strasburg, who could opt out of his contract to become a free agent, was named the Series MVP.

Washington won the first two games in Houston, then Houston returned the favor by taking three straight in D.C. With Wednesday night’s victory, the Nats took two more in Texas.