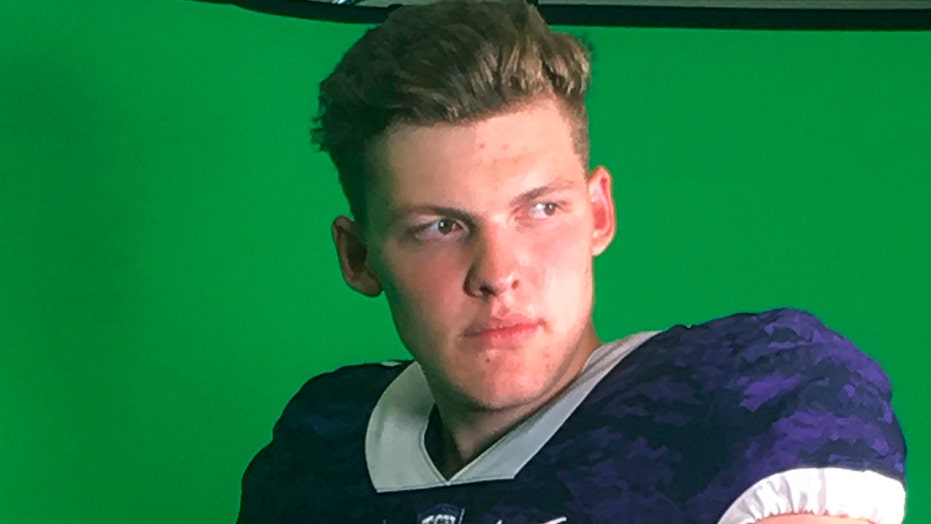 When you are a German quarterback preparing to play big-time college football in America, there's going to be a learning curve.

No worries, though, because what he lacked in knowledge of gridiron history, he made up for in size, skills and potential. The 18-year-old Honig is taking his talents from Bavaria to Texas — he has committed to play at TCU on a scholarship beginning next year — with dreams of becoming an NFL QB.

Standing nearly 6-foot-6 and weighing 235 pounds with a strong arm, Honig looks the part. Sounds it, too. In fluent English, he explains that he needs to outwork competitors and win over doubters because patience may be limited for the German kid playing the most important position.

“Especially in Texas, football is like a religion down there," he said. "They don’t want to have a European losing their games."

Even with TCU's opener against SMU postponed because of the coronavirus pandemic, Honig is itching to watch games online and possibly attend a home game this season. He plans to officially sign in December — the earliest opportunity for recruits to do so — and ultimately move to Texas in January.

“I’m getting goosebumps thinking about it,” he said.

Honig, who finished high school in July just south of Nuremberg, hasn't played this season because his German club league was postponed. He's working out on his own and studying defenses through Jordan Palmer's online program.

Brandon Collier, an American who runs PPI Recruits out of Germany, said it's a "huge feat" for a European to earn a Power Five scholarship. Baylor also offered Honig a scholarship, as did Massachusetts.

“It’s pretty rare to be recruited as a European quarterback,” said Collier, a 34-year-old former UMass defensive lineman. “Imagine when he gets the coaching for the next three to five years at TCU what his ceiling can be."

Collier met Honig almost four years ago — when Honig was 6-foot-3 — and brought him on several trips to the United States.

“He wants to be the first European NFL quarterback,” Collier said. "You have guys who have been coached by great quarterback coaches for 10-12 years who he’s competing against. That’s going to be a hurdle. He has a big, strong arm, but he needs to improve on his mechanics and delivery. That’s going to take coaching and repetition.”

Virginia recruited Luke Wentz, also a German, as a quarterback but moved him to wide receiver last year. Honig and Wentz worked out together this summer.

A Penn State coach told Honig he'd make a terrific tight end, but Horned Frogs offensive coordinator and QB coach Sonny Cumbie didn't take any athletic measurements of Honig during the TCU camp last July. He only watched him throw and then offered the scholarship. In conversations with him since then, Cumbie hasn't discussed a position change, Honig said.

“So I feel like, going in there, they want me to play quarterback,” Honig said, although he added that he's “not going to be stubborn” if it doesn't work.

“We'll see how I stack up against the other QBs,” said Honig, who expects to be redshirted next year.

Dual-threat quarterback Trent Battle of Daphne, Alabama, has also committed to TCU and at 6-foot-1 and 195 pounds is more like current Frogs quarterback Max Duggan.

Honig’s American football adventure started with a bus trip — with his father, James, at the wheel. Collier arranged the 2017 summer road trip that brought European hopefuls to U.S. camps.

That’s when then-15-year-old Honig met Harbaugh and recognized him as the former head coach of the San Francisco 49ers. Harbaugh "was intrigued by my size and by my skills,” Honig said, including his 11-inch hands.

There were more camps — and more U.S. trips — with his dad driving a second time, and workouts for coaches from West Virginia, Duke and South Carolina.

Honig, who first played quarterback at the age of 13, was “a hard sell” because coaches are reluctant to take risks at the position, Collier said.

Even with the TCU offer in his back pocket, Honig returned to the United States in March and competed in a Rivals camp. He took home the quarterback MVP trophy. He didn't go there looking for more offers.

“For me, it’s always crucial to get my name out in the U.S. football world because I think they still don’t like the idea of having a European quarterback," he said. "I try to prove them wrong with every chance I get.”

Honig, whose father played American football in Germany, said the NFL is "the end goal, but right now I’m trying to focus on getting playing time at TCU.”

His choice of college was an easy decision.

“Texas is on another level. To see the big roads and the pick-ups. It just what you think about when you think about America," Honig said. "I’m going to get a great American experience when I get there.”