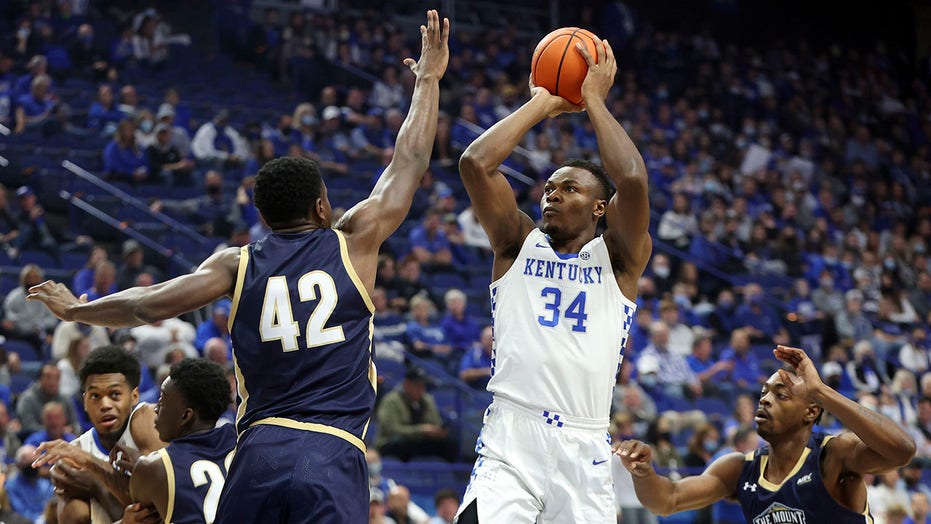 An engaging Oscar Tshiebwe has won over Kentucky basketball fans with his record-breaking play on the court and affable personality off of it.

The 6-foot-9 native of the Democratic Republic of the Congo anchors the No. 7 Wildcats' attack with his tenacity on the court, including rebounding skills not seen at Kentucky in a generation. He feels blessed to be in this position and he never seems to stop smiling.

"I just spend more time to do better the things that I’m able to do, like the rebounding and running the floor," said Tshiebwe, a junior who transferred last spring after 1½ seasons at West Virginia. "The rest of the things are coming. ... My offense is getting better, my passing ability’s getting better.

"It’s about doing what you do best, (and) keep getting better."

And he is truly enjoying the journey.

Tshiebwe fulfills nearly every autograph and selfie request almost to a fault, which can jeopardize any schedule he tries to keep.

He recently appeared at a Lexington church, where his accommodation of photo-seeking-fans upon arrival delayed the service and his sermon about 30 minutes. A Wildcat teammate once chided him for running late as he signed autographs outside the dormitory as they were boarding the team van bound for Rupp Arena.

FILE - Kentucky's Oscar Tshiebwe (34) shoots between Mount St. Mary's Malik Jefferson (42) and Josh Reaves (23) during the first half of an NCAA college basketball game in Lexington, Ky., Tuesday, Nov. 16, 2021. Tshiebwe is the unanimous pick as The Associated Press player of the year in the Southeastern Conference, announced Tuesday, March 8, 2022. (AP Photo/James Crisp, File)

"That just tells you right there that he really cares for every single fan," guard Sahvir Wheeler said. "He wants every single fan to feel like they’ve had an impact, or he can make their day with a smile or a picture. And that tells you who he is as a person before a basketball player."

Tshiebwe the person may one day could be leading a congregation, not a basketball team. His late father, Mbuyi, was a pastor and Kentucky's big man often speaks of his faith and recalls a childhood spent in the church.

Last month Tshiebwe attended a service at Broadway Baptist Church, where he spoke for 15 minutes with its growing African congregation. Pastor Daniel Ausbun saw a passion in the player that he said revealed a calling to ministry.

"He genuinely wanted an opportunity to preach and feedback on how he could be a better preacher," said Ausbun, who added that Tshiebwe spent another 40 minutes afterward greeting people.

"It’s like basketball. Coach (John) Calipari has talked about how hard he works in the gym and in practice," the pastor said. "He did the same in preaching."

On the court, Tshiebwe isn’t the only reason Kentucky (26-7) is in the mix to win a ninth national championship. The Wildcats are seeded No. 2 in the East Region have perhaps their best mix of experience since the 2012 title team led by freshman Anthony Davis.

But Tsheibwe is the clear-cut anchor.

He is averaging 17.0 points and nation-leading 15.1 boards per game. Tshiebwe has had a double-double in 15 straight games. He has a season total of 27 double-doubles — breaking Dan Issel’s Kentucky record of 26 set in the 1969-70 season — and is tied with Utah Valley’s Fardaws Aimaq for the most in the country.

"The things that he’s doing hadn’t been done for 50 years," Calipari said. He has "done some good stuff, I can tell you that. I’m proud of him."

So is Tshiebwe's mother, who he hopes can see him display all the good things he is doing in person. He is working to bring Kaya Rosalie stateside in time to see him in the NCAA Tournament.

What Kaya would see is her 255-pound son playing bully ball.

But despite his physicality — Tshiebwe has muscled his way to 58 steals and 53 blocks, both team highs — he has fouled out of a game just once this season. And that came during Saturday’s Southeastern Conference Tournament loss to Tennessee.

"Sometimes I just can’t believe what I’m doing because I never had a dream of doing everything I’m doing right now," Tshiebwe said. "I think God is helping me and I’m so grateful for everything."

Tshiebwe will likely have more to be thankful for as he could haul in a slew of postseason awards.

He has already been named SEC player of the year by The Associated Press and conference coaches, who also chose him to the all-defensive team. He’s a leading candidate for every national player of the year honor including the Naismith and Wooden awards, where he could become the latter’s second winner from Kentucky and first since Davis in 2012.

Tshiebwe wasn’t thinking about individual accolades as he sat out last spring and watched Kentucky stumble to a 9-16 record and miss the NCAA Tournament. In 2021, he was seeking a reset after a falloff from a promising freshman season in which he led WVU in scoring and rebounding.

Tshiebwe said in a virtual news conference last April that he was not happy in Morgantown and things were not working. His mood became more upbeat as he looked forward to how his game could flourish at Kentucky.

"He’s so relaxed and so comfortable and loves it at Kentucky," said Rick Mancino, who was Tshiebwe’s coach at Kennedy Catholic High School near Pittsburgh. "And, he loves the people.

"I think it’s mutual. I mean, he cares about them as much as they care about him. And I just think he appreciates that."

Tshiebwe’s enthusiasm clearly has rubbed off on teammates.

"He just has really great energy," Washington said, "but like, sometimes it’s OK to be a little bit mad. So, I try my best, you know, to rough him up, try to crack jokes on him.

"None of that works. He’s still going to be Oscar."

Tshiebwe appreciates the recognition, but said he came to Lexington with the goal of winning a championship. The Wildcats came up short in the SEC Tournament, so now their focus is on the NCAAs. Kentucky opens Thursday night against No. 15 seed St. Peter's (19-11) in Indianapolis.