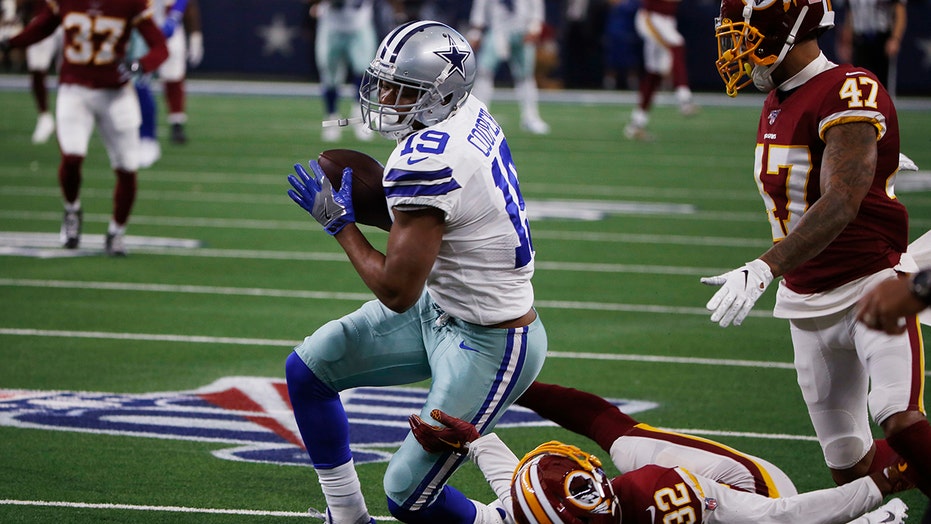 The Dallas Cowboys have an agreement on a long-term contract with receiver Amari Cooper. Now they'll keep working to get a deal with Dak Prescott after putting the franchise tag on their star quarterback.

The Cowboys and their No. 1 receiver have agreed on a $100 million, five-year contract, a person with direct knowledge of the deal told The Associated Press on Monday night. The person spoke on condition of anonymity because the deal hasn't been announced.

Cooper was set to become an unrestricted free agent and was already free to talk to other teams because the Cowboys had to use the franchise tag on Prescott.

Dallas traded a first-round pick to get Cooper from Oakland midseason in 2018, and his addition did wonders for Prescott and the offense. But Cooper's production tailed off in the second half of his first full season with the Cowboys as an underachieving team missed the playoffs.

The 25-year-old Cooper has 5,097 yards receiving and 33 touchdowns in five seasons. He was the fourth overall pick in 2015 by the Raiders. The $20 million average per season for Cooper is second to Atlanta's Julio Jones ($22 million).

Prescott's franchise tag is worth an estimated $31.5 million, but the two-time Pro Bowler is unlikely to sign the tender soon so he can maintain leverage in negotiations.

The Cowboys and Prescott have been working on a deal for about a year. He was one of the best bargains in the NFL last season with a base salary of $2 million as a fourth-round pick in 2016.

Prescott was the 2016 NFL Offensive Rookie of the Year when he led the Cowboys on a franchise-record 11-game winning streak that vaulted them to the top seed in the NFC before losing to Green Bay in the divisional round.

Dallas made the playoffs again in 2018, with Prescott getting his first wild-card win, before missing the postseason again last year amid high expectations. The Cowboys didn't renew coach Jason Garrett's contract after the disappointing season and hired Mike McCarthy.

With the NFL's offseason being altered by the coronavirus pandemic, the Cowboys could have more opportunity to get a long-term deal with Prescott before he misses valuable time working with a mostly new coaching staff.

The sides have until July 15 to get a deal done, but even with extra time to preserve a full offseason, the Cowboys hope to get an agreement much sooner.

When he was drafted, Prescott was the third-team quarterback behind Tony Romo and Kellen Moore. But preseason injuries to both made Prescott the starter, and Romo never got his job back.

Cowboys owner Jerry Jones has said repeatedly he considers Prescott his franchise quarterback, and has said it's just a matter of time before a deal gets completed.