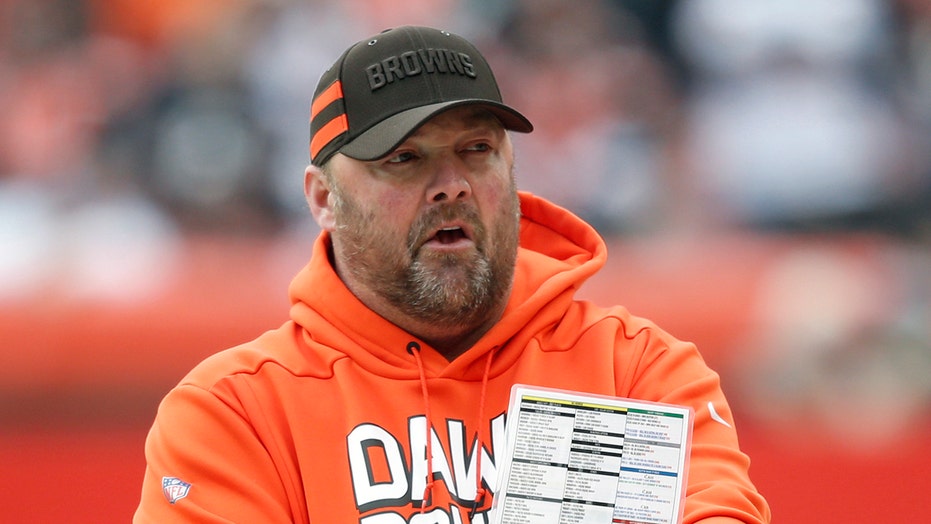 Cleveland Browns head coach Freddie Kitchens was pictured on social media Friday wearing a "Pittsburgh started it" T-shirt, likely a reference to the indefinite suspension for star defensive end Myles Garrett, who ripped the helmet of Steelers QB Mason Rudolph and hit him in the head with it.

The image of Kitchens donning the shirt went viral just a day before the teams are set to face off in a highly anticipated rematch at Heinz Field in Pittsburgh on Sunday.

GV Art & Design -- who sells the shirt -- was among the first to post the image of Kitchens wearing the shirt, with some of the letters hidden behind his jacket.

A Browns' spokesperson told ESPN's Adam Schefter the shirt was given to Kitchens "as a joke" by his daughters. He allegedly wore it to a showing of "A Beautiful Day in the Neighborhood" with his family on Friday night and didn't expect anyone in public to see him wearing it.

Kitchens told the outlet he "understands it's not a good look."

The gesture isn't much, but it could add fuel to the fire for Pittsburgh fans and players on Sunday, especially after Browns fans were seen swinging a football helmet at a Mason Rudolph pinata before last weekend's game against Miami.

Rudolph -- the subject of the swinging helmet hit -- won't play on Sunday after being benched for poor play in what the team said was a one-week decision.

Some Browns fans enjoyed seeing him wear the shirt and are "pumped" to get their own in the mail.

Earlier this week, Kitchens told reporters he wanted his players to focus on the game at hand.

"I want them to go into this game with one thing and one thing only on their minds, and that's to do their job,’’ Kitchens told Cleveland.com. “And anything that overshadows that in any way is not acceptable and it's not the best for the team.