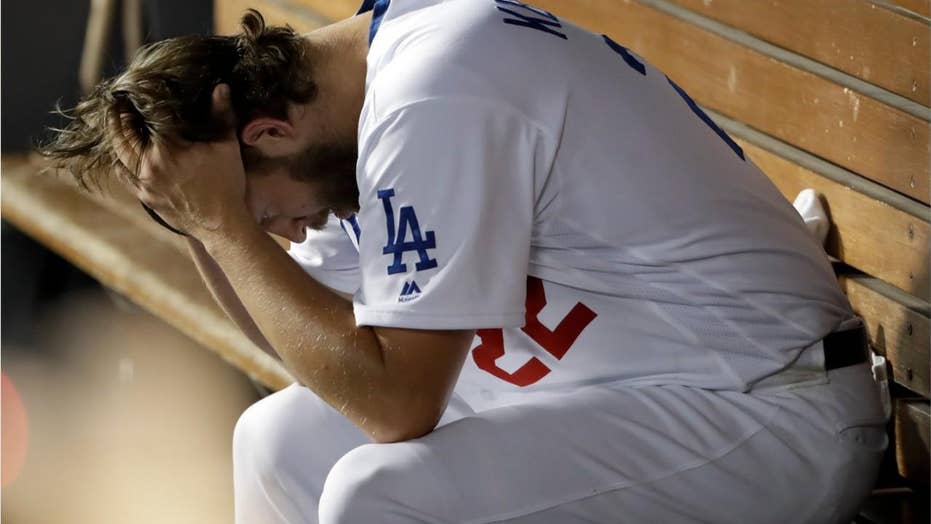 Clayton Kershaw has another postseason debacle in Dodgers loss: 'It might linger for a while'

Baseball season is over for the Dodgers and fans are looking to blame Clayton Kershaw.

Clayton Kershaw will be taking the brunt of the criticism after the Los Angeles Dodgers failed to win the World Series while coming off a seventh straight National League West division title.

In a Game 5 loss to the Washington Nationals in the National League Division Series on Wednesday, Kershaw allowed two runs in the eighth inning in relief work which tied the game. He gave consecutive home runs on consecutive pitches, giving Washington new hope.

“When you don't win the last game of the season and you're to blame for it, it's not fun,” he said. “The main reason (it hurts) is the group of guys in this clubhouse. It's a terrible feeling.”

Kershaw was seen sitting on the bench after he was taken out, clearly distraught. He admitted to reporters after the game that this particular loss was going to be hard for him to shake.

“It might linger for a while,” he said. “I might not get over it. I don't know. Spring training is going to come and I will have to be ready to pitch and do my job the best I can.”

Kershaw was also credited with the loss in Game 2 after giving up three runs on six hits in six innings.

“I'm not going to shy away from it,” he said. “Everything people say is true right now about the postseason. I understand that. Nothing I can do about it right now. It's a terrible feeling. It really is. I'm not going to hang my head. I will be here next year and try to do the same thing I try to do every single year.”

The three-time National League Cy Young Award winner has been one of the best pitchers in baseball over the last nine years. He has continued to put on great performances in the regular season, but when it comes to October baseball he has fallen short.

Los Angeles Dodgers pitcher Clayton Kershaw sits in the dugout after giving up back-to-back home runs to the Washington Nationals during the eighth inning in Game 5 of a baseball National League Division Series on Wednesday, Oct. 9, 2019, in Los Angeles. (AP Photo/Marcio Jose Sanchez)

In the postseason, Kershaw has a 4.43 ERA with 170 strikeouts and a 1.105 WHIP in more than 158 innings pitched. He is sure to continue to take the brunt of the criticism for his playoff woes.