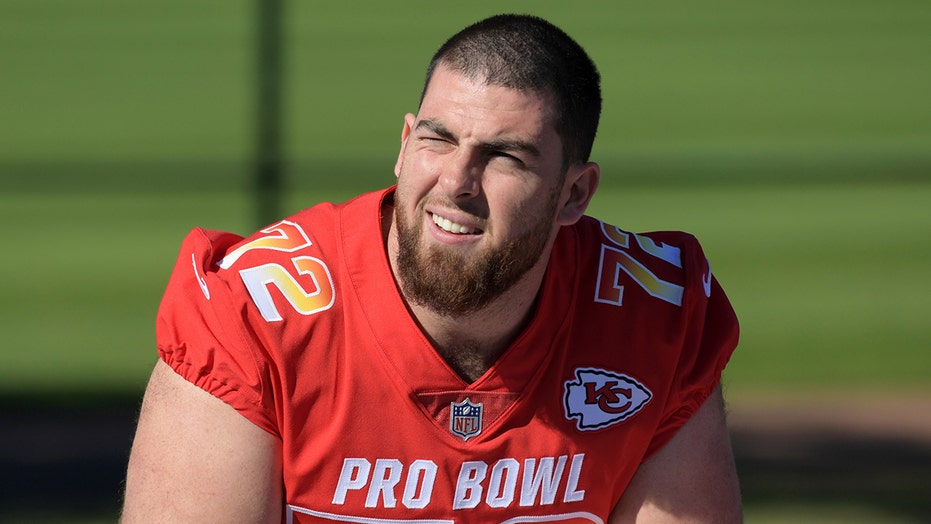 Fisher was near the Arrowhead Stadium stands when Blake Bell was celebrating his touchdown catch from Patrick Mahomes. Fisher took two beers from some fans and banged them together. He then poured them out behind his shoulders.

The clip went viral but Fisher knew that he had to pay the fans back for the beers.

“You never can put a nice cold, refreshing, smooth Bud Light in front of an offensive lineman and not expect him to enjoy it, you know?” Fisher said, according to The Athletic.

He also thanked the fans and asked help tracking them down.

“You all were amazing today,” Fisher said in a Twitter video. “I appreciate you all big time. Also, I appreciate the two guys whose beer I borrowed for one hell of a celebration. If you know them and can tag them below so I can thank them Big Fish style, I would greatly appreciate that. Chiefs Kingdom, this Bud’s for you.”

Fisher and Budweiser said they tracked the fan down and he was identified as Alex Thompson.

Thompson told KMBC-TV that he couldn’t believe what happened.

“I was like there is no way this is coming right at us,” Thompson told the station. “So, when it came in, he jumped in, and Eric Fischer came over and he grabbed the beers. He did the Stone Cold Steve Austin deal... I mean that was probably my highlight of all Chiefs games that I’ve been to."

Thompson said he didn’t expect the clip to go viral.

“I was like, 'No way this is happening, this is awesome,'” he said. “Growing up as a kid, you watch wrestling and you see Steve Austin do that. I knew what it was, and it was so cool that he did it. Then on Twitter, someone got it, put the Stone Cold Steve Austin music with it and that was blowing up; it was really cool.”