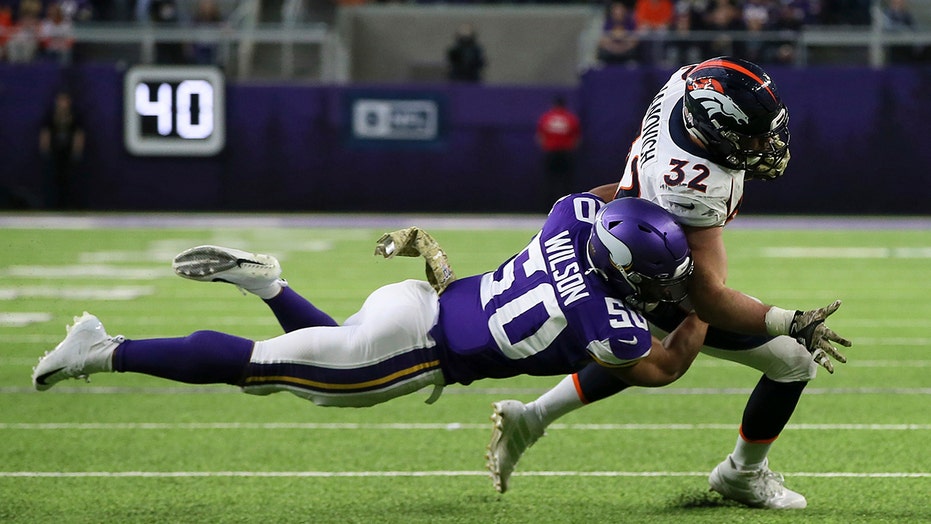 Denver Broncos fullback Andy Janovich suffered a gruesome elbow injury during the team’s loss to the Minnesota Vikings on Sunday and will miss the rest of the 2019 season.

Janovich suffered a dislocated elbow in the second quarter of the game, which caused the team to place him on the injured reserve. He had caught a pass from Broncos quarterback Brandon Allen, ran the ball a few yards and braced for a fall with his arm.

LAMAR JACKSON'S TEAMMATE DEFENDS HIM FROM DOUBTERS IN MVP RACE: 'COME SEE ME'

However, his elbow moved in a disturbing way.

The fullback came off the field grabbing his elbow immediately.

Janovich, 26, was in the middle of his fourth season with the Broncos before the injury took place. Denver selected him in the sixth round of the 2016 NFL Draft out of Nebraska.

He had played in seven games for Denver this season. He had mainly been used as a receiver out of the backfield instead of a rusher. He caught five passes on five targets for 42 yards. He only had one carry and it resulted in a touchdown in the same game he had injured his elbow.

Denver ended up blowing a 23-7 lead, thanks to three touchdown passes from Vikings quarterback Kirk Cousins.

The Broncos dropped to 3-7 on the season with the loss, putting an end to any potential playoff hopes.

The Vikings improved to 8-3 on the year and are only one behind the Green Bay Packers in the loss column for first place in the NFC North division.