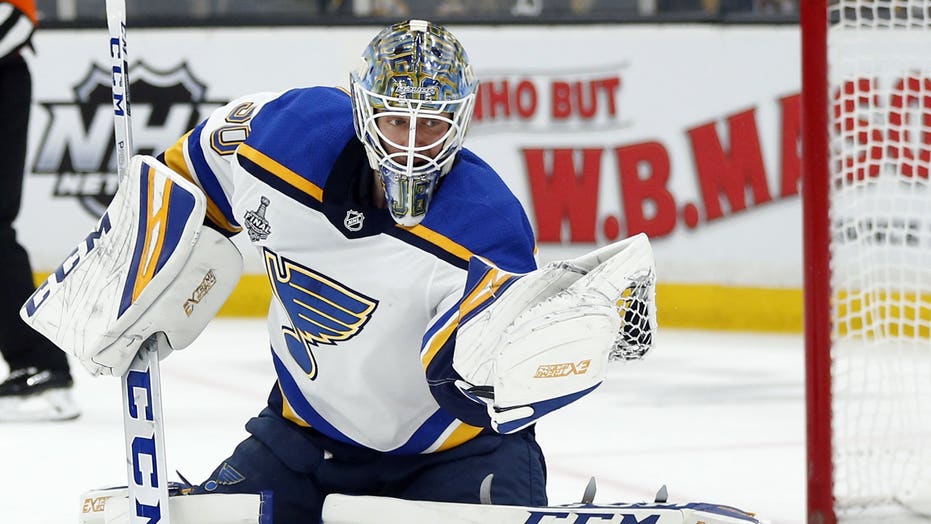 The St. Louis Blues beat the Boston Bruins 4-1 in Wednesday night's deciding game for the Stanley Cup, their first championship.

The victory was 52 years in the making.

Alex Pietrangelo added a goal and an assist and Brayden Schenn and Zach Sanford also scored for St. Louis.

The Blues woke up on New Year’s morning with the worst record in the league but won 30 of their final 49 regular-season games and soared through the playoffs to reach the final for the first time since 1970.

Boston outshot St. Louis 33-20, but the Blues went ahead at the end of the first period on goals from Reilly and Pietrangelo about three minutes apart. The second period was scoreless, then Schenn put it out of reach with 8:35 to play and Sanford made it 4-0 before the Bruins spoiled Binnington’s bid for a shutout.

St. Louis Blues goaltender Jordan Binnington catching the puck to make a save against the Boston Bruins during the second period in Game 7 of the NHL's Stanley Cup Final on Wednesday in Boston. (AP Photo/Michael Dwyer)

The already-charged atmosphere got an extra jolt of energy before the game as three-time Olympic gold medalist Aly Raisman and Super Bowl 53 MVP Julian Edelman appeared to wave a Bruins banner while wearing David Ortiz Red Sox jerseys when they were brought out to wave a Bruins banner. They were joined by Liam Fitzgerald, a young Bruins fan who survived cancer.

The retired Red Sox star is recovering in a Boston hospital after what police say was an assassination attempt in his native Dominican Republic.

The roar was even bigger for Bruins captain Zdeno Chara when he was introduced. Chara is playing with what many believe is a broken jaw.

Hours earlier, police were setting up sidewalk barriers in preparation for the first championship-series Game 7 in Boston since the Celtics beat the Lakers to win the NBA title on June 12, 1984, exactly 35 years earlier.

In addition to the 17,565 fans inside the TD Garden, thousands more were expected to pack bars and restaurants in the vicinity of the arena.