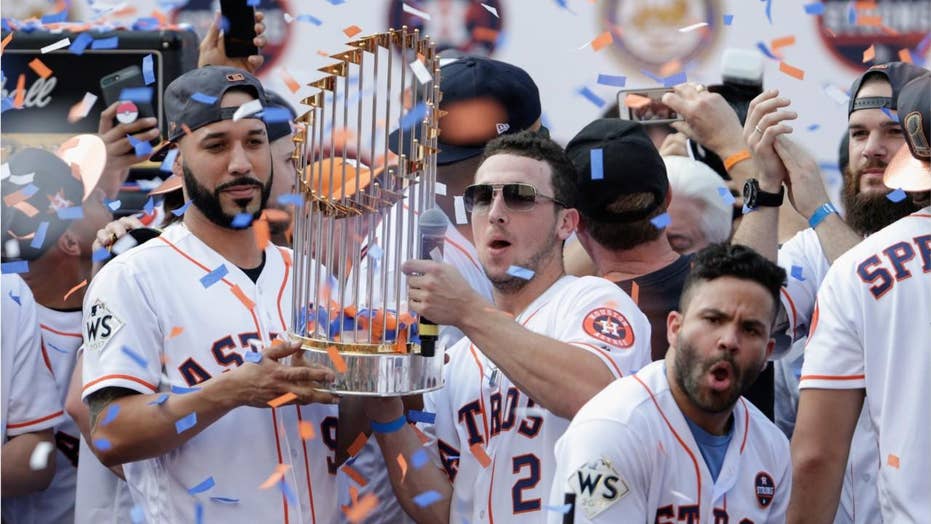 The Houston Astros, embroiled in a cheating scandal, may have tipped their own hand in the team's 2017 DVD commemorating their first World Series championship.

The team has already been accused of setting up a camera in centerfield to relay a catcher’s signs to a television in the clubhouse and then signal to the batter when an off-speed pitch was coming. On Sunday, the Twitter user known as Jomboy – who already uncovered peculiar noises coming from the Astros dugout on off-speed pitches – again brought to light the team’s alleged cheating setup.

Video from the team’s championship DVD allegedly shows where the Astros employees would tip batters. Carlos Correa comes down from the dugout and to his right you can see a trash can, a table, a few chairs and a cable. The setup is still there when Alex Bregman runs through as well.

Jomboy also points out another moment in the video where a team employee appears to be setting up a television on the table. However, there doesn’t appear to be anything notable being used to bang on the trash can as has been alleged in previous reports.

Suspicions were raised last week when former Astros pitcher Mike Fiers, as well as other unnamed sources, told The Athletic that the Astros were alerting batters when pitchers were throwing off-speed pitches.

Two sources told The Athletic that the sign-stealing extended into the postseason in 2017, but another denied it went on that long. Carlos Beltran, the team’s former designated hitter-turned-New York Mets manager, and Alex Cora, the team’s former bench coach-turned-Boston Red Sox manager, were both accused of playing a “key role” in the system.

Major League Baseball said it was investigating the allegations. The league had strengthened rules in 2019 in a bid to ensure teams weren’t stealing signs with the aid of technology.