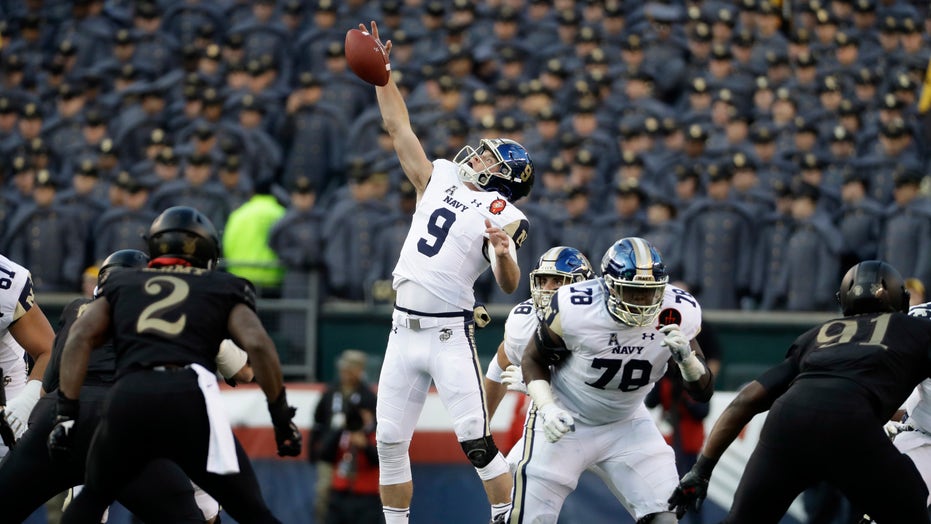 "Forged by history, bound by brotherhood."

It’s that time of year again for one of the biggest American college football rivalries.

The 120th Army-Navy game is set for Saturday, Dec. 14, in Philadelphia, and the Navy Midshipmen are looking to break the Army Black Knights' three-year winning streak while also showcasing new uniforms.

Navy, which leads the legendary rivalry 60-52-7, will be sporting throwback uniforms that pay homage to the Midshipmen teams of the 1960s.

"The uniforms they wore featured a traditional navy blue contrasted with brilliant gold accents, a brilliant look for some of the best teams in the nation during their respective seasons," Under Armour said in a press release. "This era provided the appropriate inspiration needed to outfit the current Midshipmen squad for Saturday's rivalry game."

Under Armour and the Navy collaborated to design the uniforms, which are a tribute to halfback Joe Bellino -- who passed away in March -- and quarterback Roger Staubach, who both won the Heisman while at Navy in 1960 and 1963, respectively.

Once a 5-foot-9-inch, 180-pound halfback for the Naval Academy, Bellino was the first player awarded the Heisman Trophy in 1960 for his exceptional performance on and off the field.

Staubach, the 1963 Heisman Trophy winner for the U.S. Naval Academy and a Hall of Fame quarterback, didn’t join the Dallas Cowboys until 1969 -- five years after he was drafted -- so that he could complete his required military service, including a one-year tour of duty in Vietnam.

The Army also unveiled their 1st Cavalry Division uniforms for the big game, which feature a camouflage-based helmet and jersey.

The Midshipmen and Black Knights first met on the football field in West Point, N.Y., in 1890.

The branches will meet on Lincoln Financial Field, in Philadelphia, on Dec. 14. The game will kick off at 3 p.m. ET.