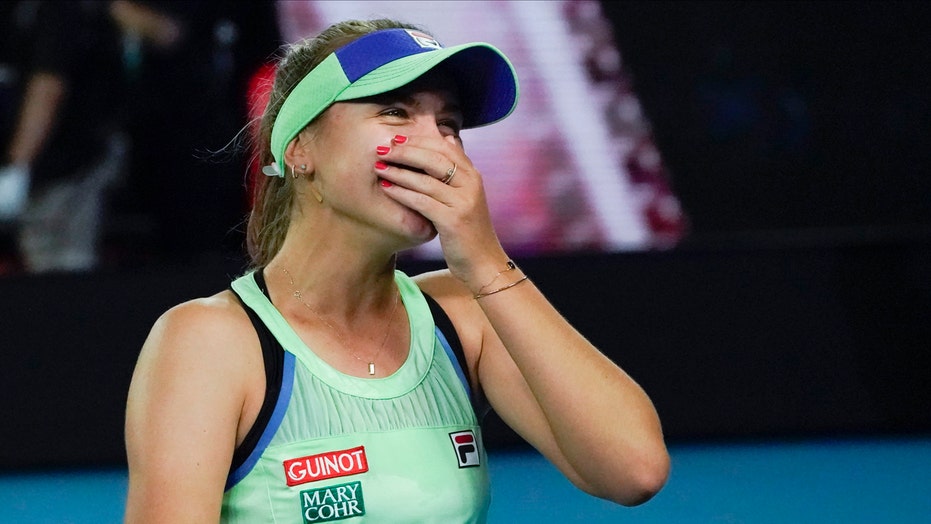 This, essentially, was where Sofia Kenin was going to win or lose the Australian Open final: Down love-40 while serving at 2-all in the third set against two-time major champion Garbiñe Muguruza.

Kenin came through in spectacular fashion. She won the next five points, each with a winner -- one an ace, the others clean groundstrokes to cap exchanges of 11 shots or more.

The American wouldn't lose another game on her way to earning a Grand Slam title at age 21.

Sofia Kenin of the U.S. reacts after winning a point against Spain's Garbine Muguruza during the women's final at the Australian Open tennis championship in Melbourne, Australia, Saturday, Feb. 1, 2020. (AP Photo/Dita Alangkara)

Demonstrative as can be -- whether spiking a ball, dropping her racket or slapping her thigh -- the 14th-seeded Kenin won the first major final of her career Saturday by coming back to beat a fading Muguruza 4-6, 6-2, 6-2 at Melbourne Park.

“This is my first speech, but I'm going to try my best,” Kenin said during the trophy ceremony at Rod Laver Arena, where the retractable roof was shut because of rain much of the day.

“My dream has officially come true,” she told the crowd. “Dreams come true. So if you have a dream, go for it, and it's going to come true.”

Kenin was so magnificent when it mattered the most, saving 10 of 12 break points she faced, while converting 5 of 6 that she earned.

Muguruza, meanwhile, seemed hampered in her movement and, in particular, her serving: She helped Kenin by double-faulting eight times, including three in the last game, one on championship point.

AUSTRALIAN OPEN BALL GIRL HIT WITH RAFAEL NADAL SHOT, TENNIS STAR MAKES UP FOR IT WITH A KISS

Kenin immediately covered her face with both hands.

For quite some time, she was overlooked and underappreciated, drawing much less attention than other young tennis players from the U.S., such as 15-year-old Coco Gauff -- Kenin beat her in the fourth round this week -- and 18-year-old Amanda Anisimova.

Kenin will be taken more seriously now. By everyone.

With her father, Alex, who also coaches her, watching nervously in the stands, Kenin became the youngest Australian Open champion since 2008, when Maria Sharapova won the hard-court tournament at age 20.

Kenin is expected to rise to No. 7 in Monday's WTA rankings, the youngest American to make her debut in the top 10 since Serena Williams in 1999.

In the men's final on Sunday, defending champion Novak Djokovic will face Dominic Thiem, a 26-year-old Austrian who was the runner-up to Rafael Nadal at the French Open the past two years. Djokovic seeks a record-extending eighth title at Melbourne Park and 17th major trophy overall; Thiem is trying to become the first man born in the 1990s to win a Grand Slam title.

Kenin was born in 1998 in Moscow to Russian parents; they had moved to New York in the 1980s, but returned home for the birth of their daughter. A few months later, the family returned to the U.S.; Kenin grew up in Florida and still makes her home there.