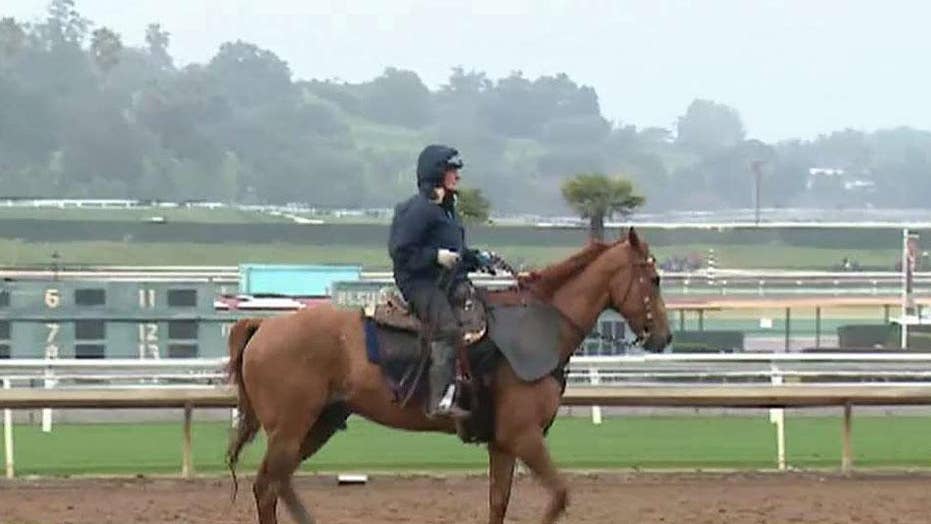 Southern California's Santa Anita Park has been shut down indefinitely so experts can study its dirt surface after 21 horses die in two months; Jonathan Hunt reports.

After six weeks without any deaths, a horse had to be euthanized Friday while training at the Santa Anita Racetrack in Southern California, marking the track’s 24th horse fatality since the beginning of the winter meet in December, according to a report.

Commander Coil suffered a shoulder injury during light practice, the Los Angeles Times reported. The 3-year-old gelding had not yet raced. A statement from the Stronach Group, which owns the track, called Commander Coil’s injury “uncommon.”

Santa Anita closed the track indefinitely in early March after 4-year-old filly Let's Light the Way became the 21st horse to die after suffering an injury during a workout.

Commander Coil is the 24th horse to die at Santa Anita since December. (Associated Press)

Since then another horse died while training and, most recently, 5-year-old Arms Runner fatally collapsed during the San Simeon Stakes on March 31, when the track resumed racing.

Commander Coil’s death happened on the same day that another horse, 3-year-old filly Congrats Gal, died of an apparent heart attack in the eighth race at Pimlico Race Course in Baltimore on the eve of the Preakness Stakes. The Stronach Group also owns Pimlico.