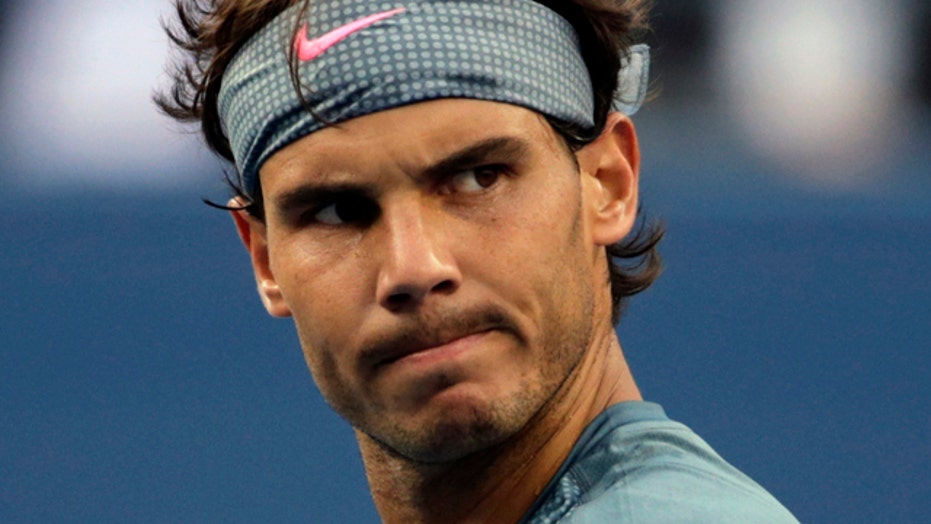 Rafael Nadal pulls out of US Open due to wrist injury

NEW YORK – Rafael Nadal pulled out of the U.S. Open on Monday because of an injured right wrist, making him the fourth reigning men's champion in the last 45 years to sit out the tournament.

Nadal and the tournament announced his decision simultaneously, exactly one week before the year's last Grand Slam tournament begins.

The 28-year-old Spaniard was hurt July 29 while practicing on his home island of Mallorca ahead of the North American hard-court circuit. The next day, Nadal said he had been told by doctors to wear a cast on his wrist for two to three weeks, and would have to sit out U.S. Open tuneup tournaments in Toronto and Cincinnati.

Nadal also said at that time he expected to be able to return for the U.S. Open itself. But on Monday, he issued a statement on his Facebook page, saying he is "very sorry to announce" he would not play in New York.

"I am sure you understand that it is a very tough moment for me since it is a tournament I love and where I have great memories from fans, the night matches, so many things," Nadal's posting read. "Not much more I can do right now, other than accept the situation and, as always in my case, work hard in order to be able to compete at the highest level once I am back."

The second-ranked Nadal plays left-handed, but he uses a two-handed backhand.

The other U.S. Open men's singles champions who did not return to the field the following year were Ken Rosewall in 1971, Pete Sampras in 2003, and Juan Martin del Potro in 2010.

Nadal won his second championship at Flushing Meadows in 2013, part of a run of reaching the final in each of his last three appearances in the U.S. Open. He beat Novak Djokovic to win the titles in 2010 and last year, and lost to Djokovic in 2011.

But now Nadal will be skipping the tournament for the second time in three years. He did not enter the U.S. Open in 2012, part of an extended absence because of a problem with his left knee.

This will be the second time Nadal failed to try to defend a Grand Slam title: A year after winning Wimbledon in 2008, he chose to not enter that tournament, citing knee tendinitis.

Nadal is 44-8 with four titles in 2014, including his record ninth French Open trophy.

He hasn't competed since losing in the fourth round of Wimbledon to 19-year-old Nick Kyrgios in four sets on July 1.

Nadal's 14 major titles are tied with Sampras for the second most in the history of men's tennis, trailing only Roger Federer's record of 17.

With Nadal out, five-time U.S. Open champion Federer -- now 33, but coming off a runner-up finish at Wimbledon last month and a hard-court title in Cincinnati on Sunday -- will join the No. 1-ranked Djokovic as a favorite in Flushing Meadows.