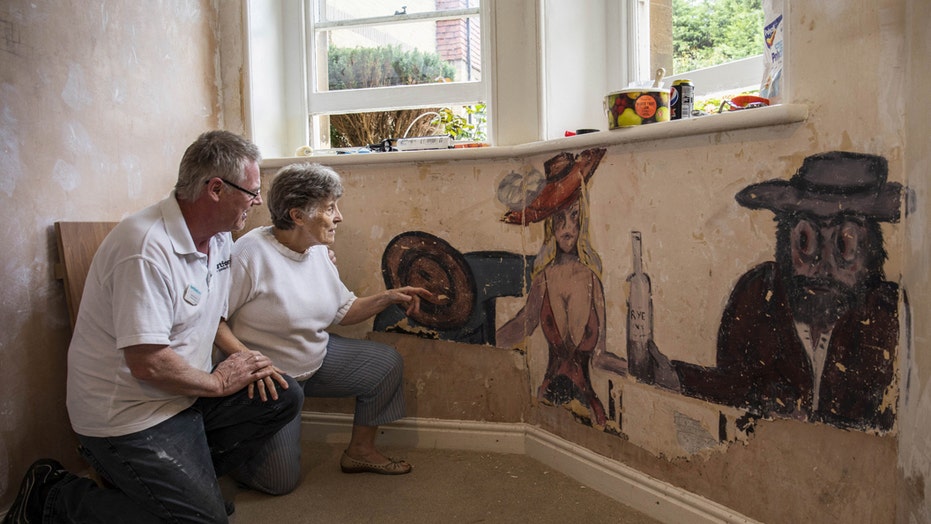 Workers renovating a room for a new resident at a nursing home discovered racy paintings dating back to World War II beneath the wallpaper.

Stokeleigh Residential Care Home, in Bristol, England believe the paintings are linked to American soldiers who were stationed in the building, the BBC reports.

Alex Mazur-Kruszynska, Stokeleigh Care Home's manager, told the British news outlet it was a "really exciting" discovery and added it's "the best thing" to happen to the facility.

David Parton a staff member at Stokeleigh Care Home who discovered a series of paintings believed to date back to World War II shows them to Jan, a resident at the Care Home. Due to the picture's "racy" nature, it is believed the room may have been used as a gentlemen's lounge. (Credit: SWNS)

"We had no idea they were there until we started refurbishing the room and our maintenance man was taking the woodchip off the walls," she said in comments obtained by SWNS. "We thought at first it might have just been used as a gentleman's lounge. It was very interesting to find out what they really were."

"Finding the murals is the best thing, really," she continued. "The residents find it fascinating as well."

Workers at the home believe it may have been used as a gentlemen's lounge and British historian Anthony Beeson said the work is "certainly" from American soldiers.

"Several of the large houses in the area... were requisitioned for troops," Beeson told the BBC. "Note that the bottle has 'rye' written on it which no Englishman would do. I suspect it was their mess-room or the like."

Local historian Anthony Beeson said he believed were created by GIs stationed in the building during the war. (Credit: SWNS)

A second painting was discovered in the room, appearing to show musical notes and a dog holding a bone, which Beeson believes may reference the English children's song, "This Old Man."

"The bulldog probably refers to the song 'Knick Knack paddywack...give a dog a bone, this old man came rolling home', which would be very appropriate for a bar and also account for the notes," Beeson added.

The picture of the bulldog and musical stave is observed by a resident and worker at Stokeleigh Residential Care Home. (Credit: SWNS)

The facility is going to paint over the murals in order to get ready for the next resident, but Mazur-Kruszynska added a plasterboard will be put over them so they can be preserved.