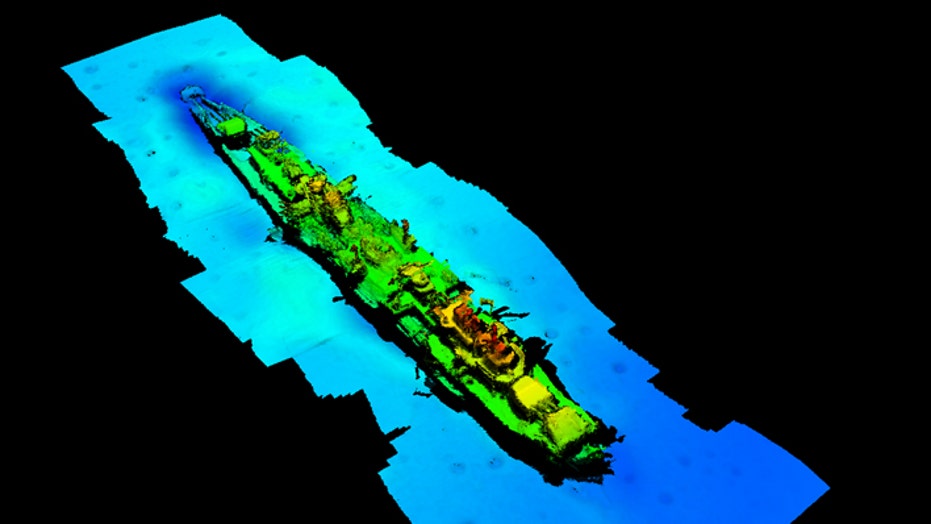 A German warship that was sunk during World War II has been identified off the coast of Norway.

The cruiser Karlsruhe was sunk on April 9, 1940, during the invasion of Norway.

The mysterious wreck was first spotted in 2017 during inspection work on a power cable between Norway and Denmark, according to a statement released by Norwegian power company Statnett.

“This summer, Statnett's Senior Project Engineer Ole Petter Hobberstad got the chance to find out more about the sunken ship that had been observed 13 nautical miles from Kristiansand in Southern Norway,” Statnett said. “From the offshore vessel ‘Olympic Taurus’, the mysterious wreck was investigated by ROV (Remotely Operated Vehicle) and multi-beam echo sounders.”

The 571-foot-long ship was identified as the Karlsruhe. Lying at a depth of 1,607 feet, the wreck is just 49 feet from the power cable.

A multibeam echosounder made a sonar scan of the wreck. (Statnett/Isurvey)

Eerie photos captured by the undersea drone show the warship resting on the seabed. Some of the cruiser’s guns and a porthole can be clearly seen, along with a Nazi Swastika symbol on the ship’s structure.

In the statement, Frode Kvalø, an archaeologist and researcher at the Norwegian Maritime Museum, described the undersea images as a rare sight. Typically, large warships with a large center of gravity turn around when they sink, but the Karlsruhe sits firmly on the seabed with its cannons pointing toward the sea, according to Kvalø.

Karlsruhe was leading the attack on the Norwegian city of Kristiansand when the cruiser came under fire from Norwegian artillery and was torpedoed by a British submarine. She was eventually scuttled by German forces.

An undersea drone captured an image of the Nazi symbol. (Statnett/Isurvey)

Other World War II wrecks have been discovered around Norway in recent years. In 2017, for example, engineers working on a sub-sea power link discovered what is believed to be the wreckage of a lost World War II Royal Air Force bomber off the coast of Norway.

In 2018, an extremely rare World War II Spitfire fighter plane flown by a pilot who later took part in the "Great Escape" was recovered from a remote Norwegian mountainside.

Specially equipped for long-range reconnaissance, the Royal Air Force Spitfire AA810 was shot down on March 5, 1942, during a mission to photograph the German battleship Tirpitz.