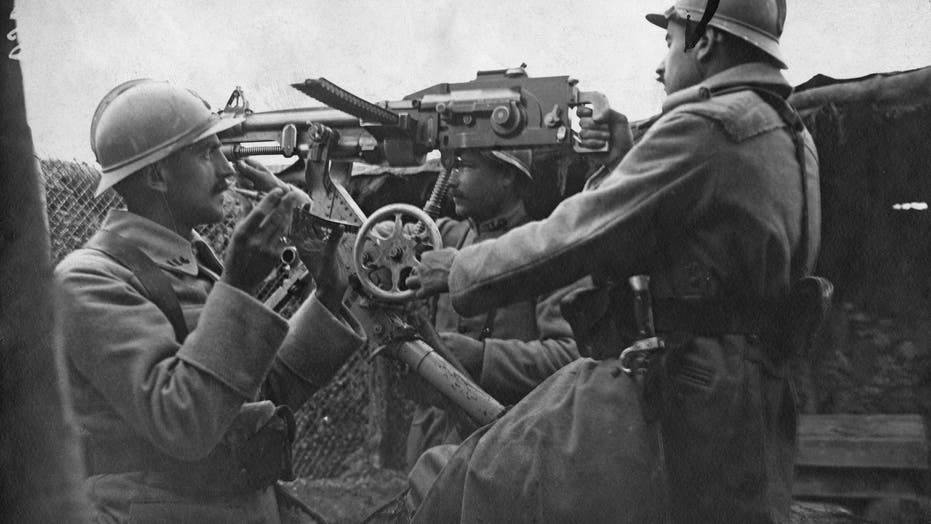 'War to end all wars': How World War I still resonates today

As the world marks the 100th anniversary of the armistice that ended World War I, the National World War I Museum and Memorial serves as a reminder of the sacrifices U.S. troops made in 'The Great War.' Eric Shawn reports from Kansas City, Missouri.

Scientists from Duke University have revealed that World War I helmets perform remarkably well against shock waves compared to their modern high-tech counterparts.

One helmet, the French Adrian design, even performed better than a modern design in terms of protection from overhead blasts, according to the Duke biomedical engineers' research.

A paper on the research has been published in the journal PLOS ONE.

"While we found that all helmets provided a substantial amount of protection against blast, we were surprised to find that the 100-year-old helmets performed just as well as modern ones," said Joost Op 't Eynde, a biomedical engineering doctoral student and first author of the study, in a statement. "Indeed, some historical helmets performed better in some respects."

French soldiers manning a machine gun in Marne, during World War I, circa 1915. They are wearing the distinctive Adrian helmet. (Photo by Paul Thompson/FPG/Getty Images)

"This study is, to the best of our knowledge, the first to assess the protective capabilities of these historical combat helmets against blasts," added Op 't Eynde.

DIARY FROM WORLD WAR I DISCOVERED IN BARN, RECOUNTS BLOODY BATTLE OF THE SOMME

The helmets were placed on a dummy's head outfitted with pressure sensors at various locations. Researchers then placed the head directly underneath a shock tube, which was pressurized with helium until a membrane wall burst, releasing the gas in a shock wave, Duke University explained in the statement. “The helmets were tested with shock waves of varying strength, each corresponding to a different type of German artillery shell exploding from a distance of one to five meters away [3.3 feet to 16.4 feet].”

A French World War I Adrian helmet sits beneath a shock tube to test how well it protects the dummy underneath from a shock wave. The ridge down the center of the helmet, which was designed for deflecting shrapnel, but may well have also helped deflect shock waves, scientists say. (Joost Op 't Eynde, Duke University)

“The amount of pressure experienced at the crown of the head was then compared to brain injury risk charts created in previous studies,” the scientists added. “While all helmets provided a five-to-tenfold reduction in risk for moderate brain bleeding, the risk for someone wearing a circa-1915 French 'Adrian' helmet was less than for any of the other helmets tested, including the modern advanced combat helmet.”

Op 't Eynde described the result as intriguing, noting that the Adrian helmet was manufactured using similar materials to the British and German World War I helmets. "The main difference is that the French helmet had a crest on top of its crown,” he said. “While it was designed to deflect shrapnel, this feature might also be deflecting shock waves."

Scientists also noticed that, because the pressure sensor was mounted directly beneath the Adrian helmet’s crest, the crest provided an additional layer for reflecting the shock wave. The French helmet, however, did not show the same performance with pressure sensors located in other positions. “For locations such as the ears, performance seemed to be dictated by the width of the helmet's brim and just how much of the head it actually covered,” the Duke researchers said.

A World War I Brodie helmet that was used by American and British forces in is hit with a shock wave to test how well it protects the dummy underneath from primary blasts. (Joost Op 't Eynde, Duke University)

Op 't Eynde thinks that the layered structure of the modern helmet may be critical to its performance, contributing to blast protection.

Experts say the research project could help improve blast protection of future helmets. "The difference a simple crest or a wider brim can make in blast protection, shows just how important this line of research could be," said Op 't Eynde. "With all of the modern materials and manufacturing capabilities we possess today, we should be able to make improvements in helmet design that protect from blast waves better than helmets today or 100 years ago."

WORLD WAR I BATTLECRUISER WRECK DISCOVERED NEAR THE FALKLAND ISLANDS

A high-speed test was used on a French World War I helmet to simulate bombardment by a shock wave designed to imitate a blast from German artillery shells a few meters away. (Joost Op 't Eynde, Duke University)

Peter Suciu, co-author of the book “A Gallery of Military Headdress,” told Fox News that World War I helmets, particularly the French Adrian helmet, were designed with low-velocity impacts in mind. “Today's helmets are meant to better address high-velocity impacts from small arms,” he added.

Suciu, who wasn’t involved in the Duke study, noted there are also many new developments with helmet liners. “Making the perfect helmet requires dealing with numerous threats,” he told Fox News. “The final consideration is making a helmet that is comfortable to be worn for extended periods. If the soldier doesn't wear it then it doesn't protect at all.”