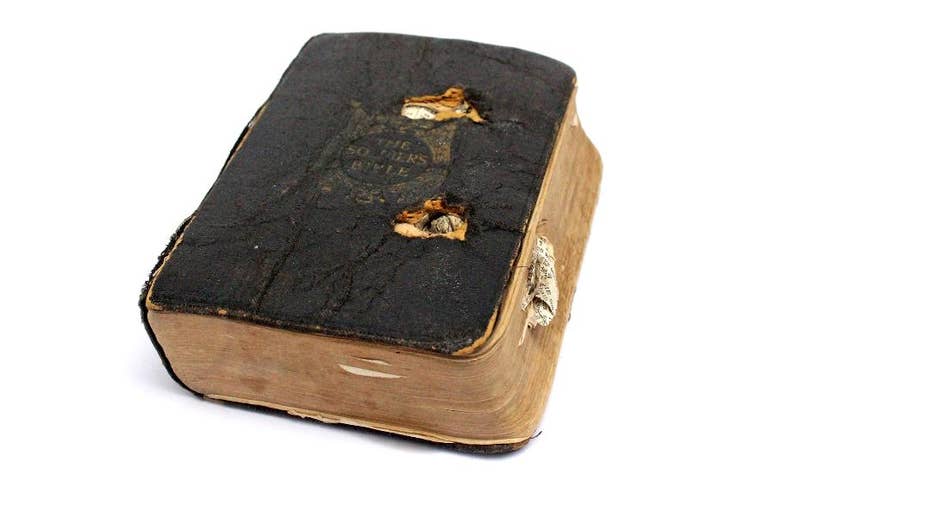 A Bible marked with bullet holes from a German machine gun helped save the life of a British World War I soldier, his daughter has explained.

The Bible belonged to Private Leslie Friston, a nurse with the Royal Army Medical Corps, Sky News reports. Blinded and suffering from respiratory problems following a gas attack in 1917, the then 23-year-old soldier was recovering in a makeshift hospital bed when a German plane machine-gunned the building. The bullets passed through the building’s tin roof and two hit his Bible, which was on Friston’s bedside table.

“He said the Bible saved his life as it took the brunt of the attack," said his daughter, Ena Thompson.

The Bible was damaged when a German plane machine-gunned a makeshift hospital. (The Royal British Legion)

The Bible offers a glimpse into the war at a time when people across the globe are preparing to commemorate the end of the devastating conflict. November 11 marks the centenary of the Armistice agreement that brought the Great War to an end.

Friston survived the war and brought the Bible home with him, Sky News adds. The soldier regained his eyesight and ran a grocery store in southwest London, ultimately passing away in 1958 at the age of 64.

"He was incredibly lucky and I think he knew this as he kept the Bible with him for the rest of his life," Thompson added.

Private Leslie Friston's bullet-scarred Bible, which he brought with him when World War I ended. (The Royal British Legion)

The soldier’s daughter was speaking as part of a fundraising appeal organized by military veterans’ organization The Royal British Legion. The annual Poppy Appeal supports the Armed Forces community.

Almost 1.7 million British troops were wounded during World War I and over 700,000 were killed, according to British War Office data. Around 6 million British troops were mobilized in the conflict. In total, the war resulted in the deaths of 13 million military personnel and left 21 million more wounded, according to the Commonwealth War Graves Commission. World War I is among the deadliest wars in modern history.

Private Leslie Friston is third from the left in the middle row of this picture. (The Royal British Legion)

Other soldiers’ Bibles have also been thrust into the spotlight in recent years. In 2016, the Museum of the American Revolution in Philadelphia purchased an extremely rare Bible from the Battle of Bunker Hill. The King James Bible, which is on display in the Museum, is inscribed by American soldier Francis Merrifield, who thanks God for sparing his life in the bloody 1775 battle.